We (meaning me, Bob, Glenn, Paul, Trish & about 25 other yachties)  took the dinghy across to the yacht club here in the bay of Port Resolution, on the island of Tanna (Tanna means ‘Earth’ in Tannese),  to meet Stanley, who runs the yacht club, and who had also organized the trip for us.  There were about 30 cruisers all together, from the Pacific rally. We all piled into the waiting pick up trucks and headed off down the dirt tracks through the jungle to the greeting center.

When Bob did the trip up the volcano with the first Oyster World Rally  6 years ago, it was simply a truck ride to the volcano and then a hike up to the top.  Today, the islanders, having capitalized on the tourist’s interest and have made it much more of an event.

The visitor center was built just a short truck ride from the base of the volcano.  Here you pay for your visit and collect your ‘hard hat’ if you wish to wear one.  I really couldn’t see the point of it, if I was going to get smacked in the head by something flying out of an erupting volcano, an ugly little plastic hat was hardly going to offer me any protection!

It all starts with a “ceremony”; first the tourists are divided into groups, determined by whichever country they’re from, and issued a guide for the trip.  Then we’re all given safety instructions for the visit!  Once again I had to question what the hell I was thinking, climbing up an active volcano, did I have a secret death wish, and honestly what was the use of safety instructions? It’s an “active ERUPTING volcano” for crying out loud, and this bunch of nutcase’s were going to be walking around the rim, the only safety instructions necessary as I could see it, would be to tell us NOT TO JUMP IN!

Once the all important safety instructions had been issued,  a person from the audience is invited to present the Chief with Kava, who  then goes away to decide if we’re allowed to visit the volcano,  meanwhile, the local people in their traditional grass skirts arrive to perform a dance.  After the initial dance, we (the tourists) were invited to join in, which involves much vigorous stamping of the feet and shouting, I didn’t partake, mainly for fear of dislocating a hip.  Obviously Paul (from Babe) was first up to dance, and with his typically tremendous enthusasiam.  Following the dance the Chief reappears, and having consulted with the volcano (!) grants his permission for us all to visit the volcano.

We were all issued a number, for the pick up truck that was to deliver us to the foot of the volcano.  Then another bone shaking ride followed, through jungle, via pot-holed dirt tracks to the base. The path up was steep, very steep in places,  and quite slippery due to all the ash underfoot.

Having lived onboard for the last three months I’m a little out of shape, (one doesn’t get much exercise on a boat) and it wasn’t long before I was huffing and puffing with a beetroot face that mimicked the glow from the volcano.  Once up at the top, there’s a viewing area with a wobbly fence that offers absolutely no protection, they may as well just have painted a line on the ground with the words “do not cross”. 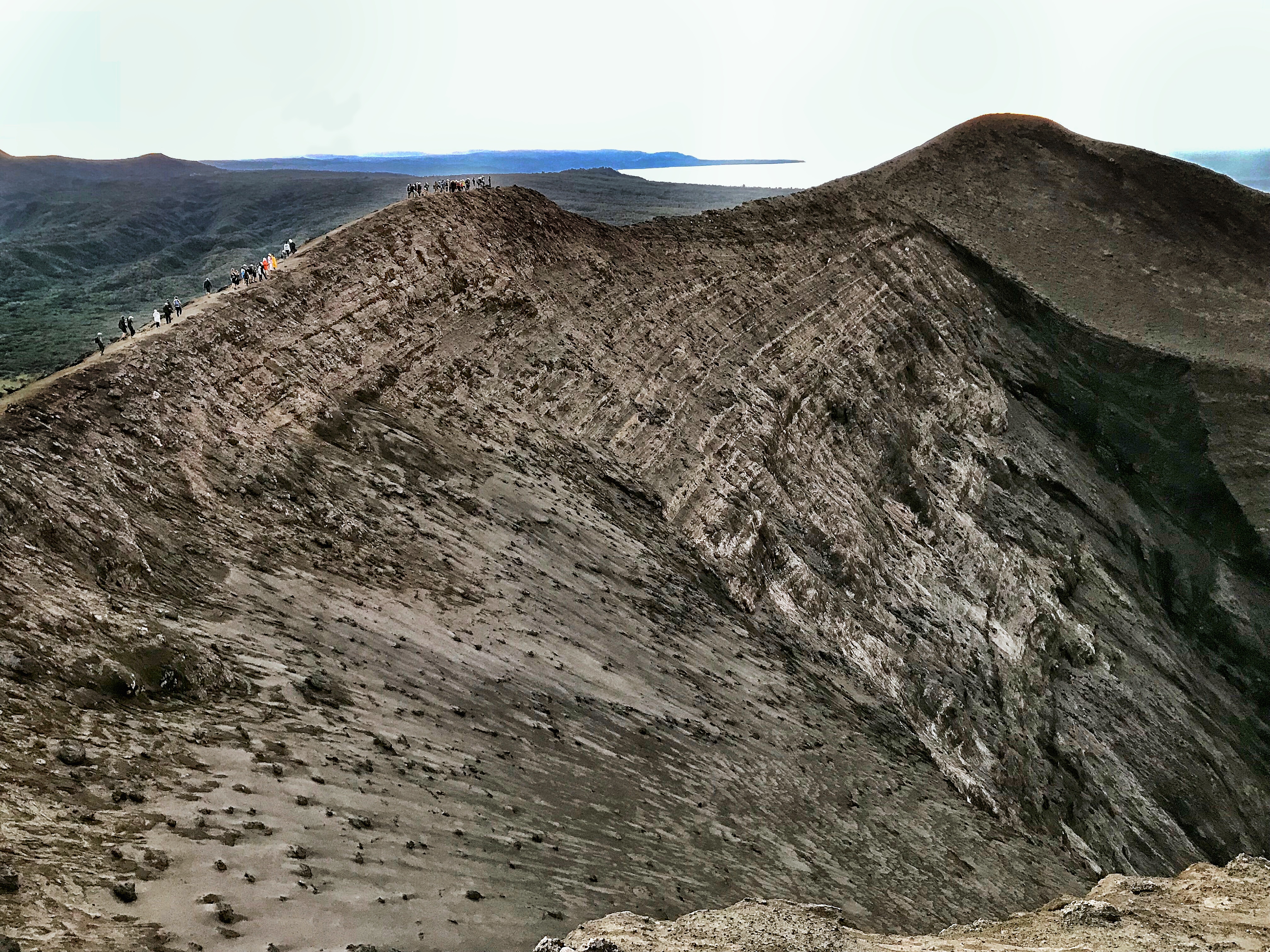 The path around the rim of the volcano is only about a meter wide in places, with no fence, and a sheer drop on each side. 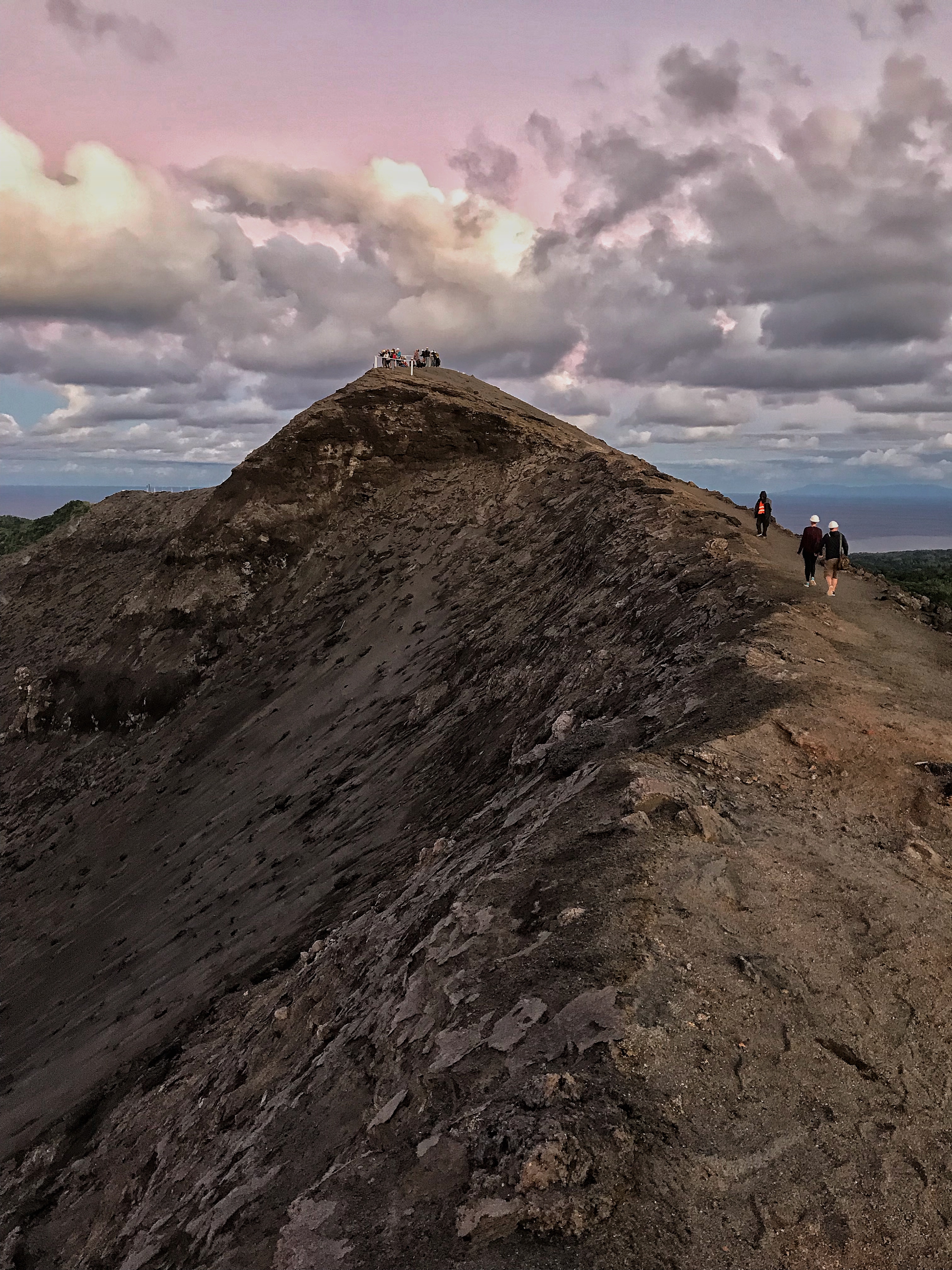 Thankfully the wind was in the right direction today for people to walk around  the rim and gaze right down into the crater to see the exploding, boiling lava. With each explosion the ground beneath us shook, and enormous glowing red boulders spewed out of the crater high up into the air like gigantic burning coles. 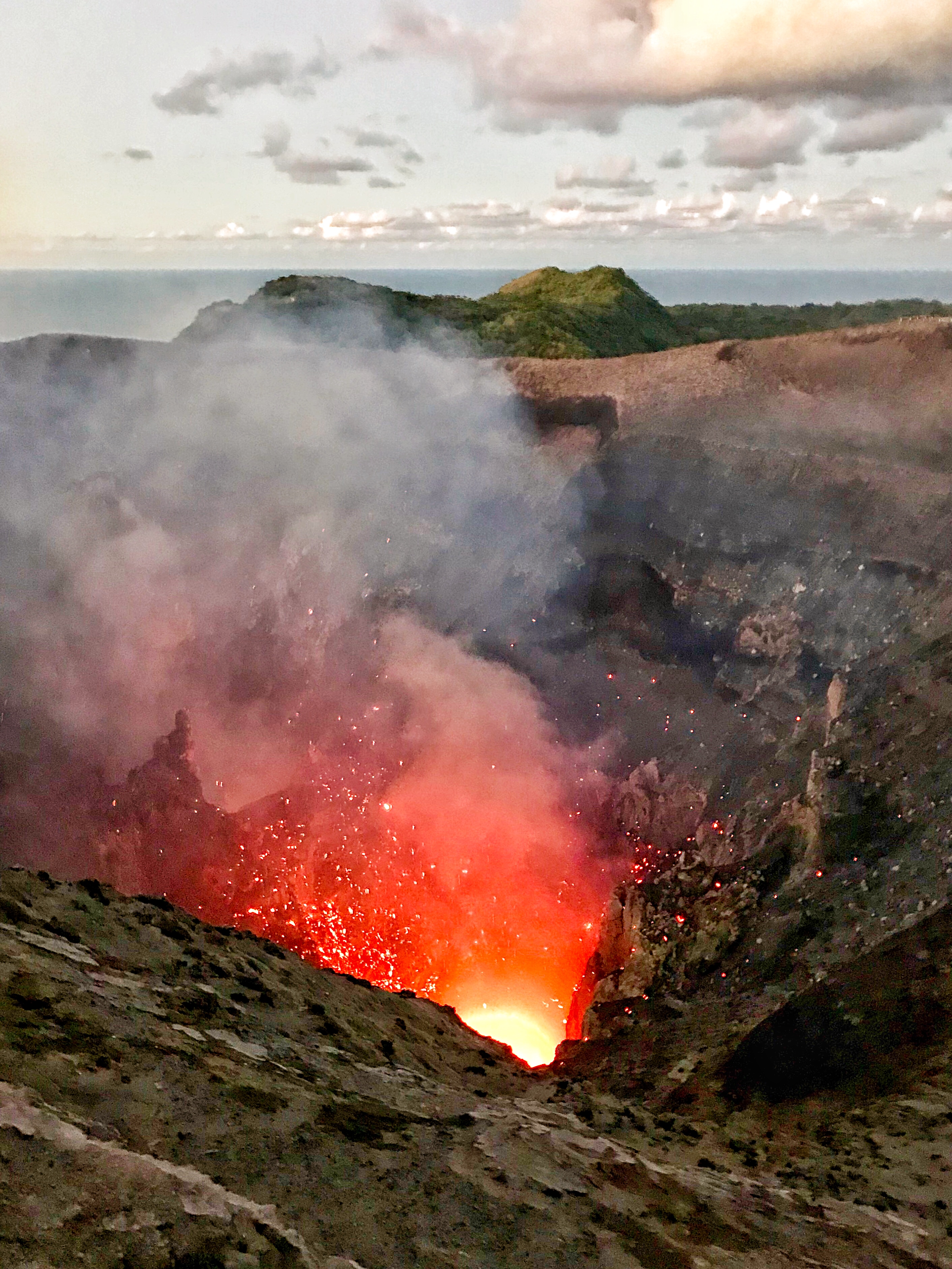 The clouds of ash billowed above the crater and hung like dark storm clouds over our heads. We were offered masks by our guides, to protect us from the ash, the masks had a duck bill type shape to them which made us all look quite comical.  I had declined the hard hat, but I took the “Donald Duck” mask. 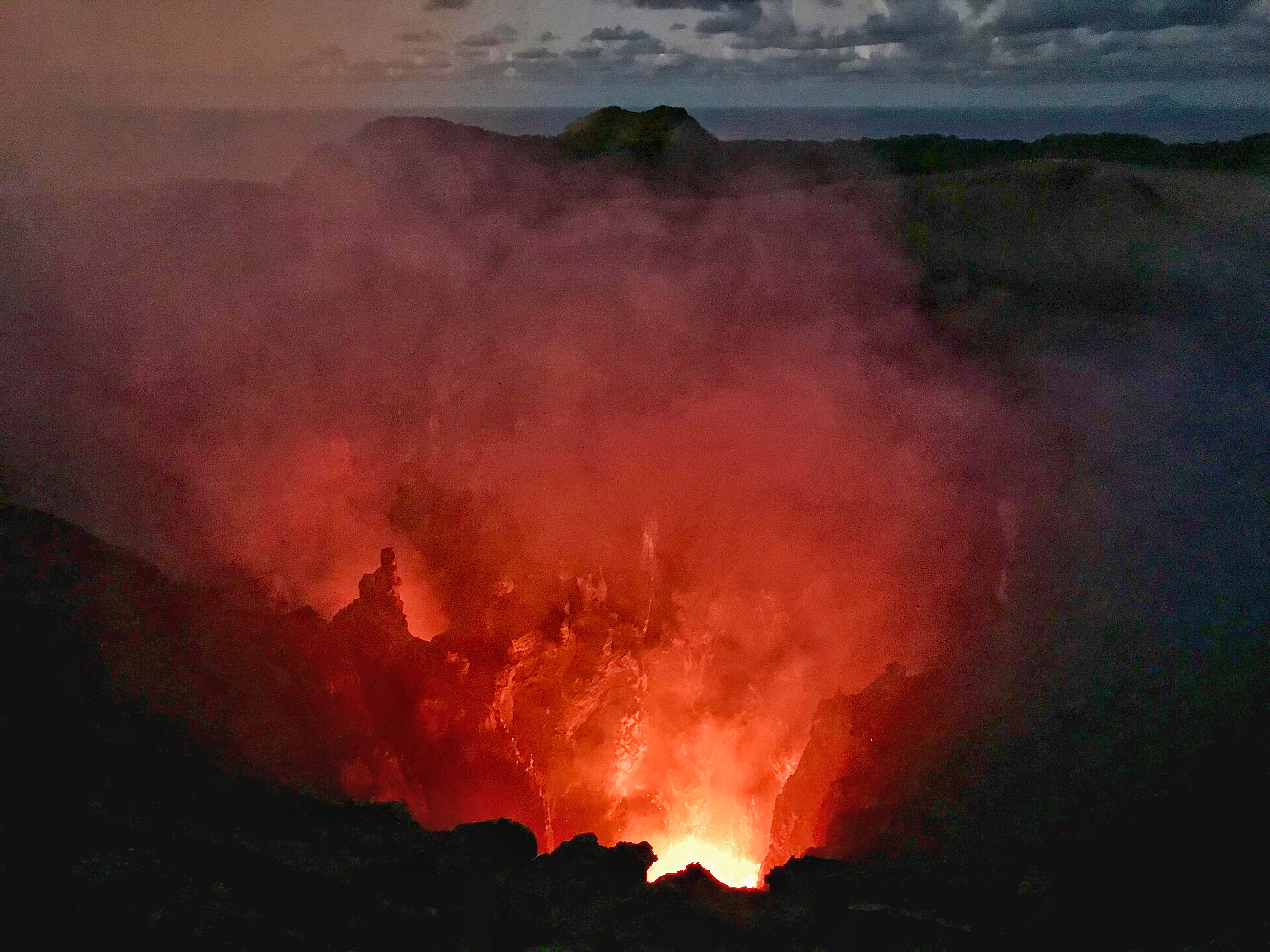 As the sun set and the wind picked up, the temperature plummeted. Trish and I stood huddled together for warmth, we were both freezing.  Bob, Paul and Glenn had gone further around the rim to get a better view into the crater, this had involved a very steep climb down, and neither Trish nor I had been tempted to join them.  It was fast growing dark, and the idea of the climb back down the volcano was not a pleasing prospect, thankfully we had at least all brought headlights.

This was a truly amazing experience, that I don’t think you would be allowed to do anywhere else in the world; thankfully for us, the island of Tanna has not yet embraced “Health and Safety” laws.

I can now say I’ve been there bought the t-shirt, and survived; would I do it again “HELL NO”

This article was posted in In The Pacific, Pacific Rally 2019 and tagged Mount Yasur Volcano, Tanna, Vanuatu Volcano. Bookmark the permalink. Follow comments with the RSS feed for this post.Trackbacks are closed, but you can Post a Comment.