Swimming With The Penguins

Monday March 11th
We had a day tour today to the islands of Bartolome and Santiago, where we were promised sightings of the Galapagos penguin.
It had been arranged that we would meet the bus at 6am on shore. However, having had such a fun day and night yesterday we were running a little late this morning, we arrived on the shore somewhere between 10 and 15 minutes late. There was no sign of the bus so we grabbed a cab. Happily it was the same lovely gentleman that drove us home from the airport dock yesterday.
Once at the dock, it didn’t take us long to locate our tour boat “Genovese” and we were speedily transported to the boat where we were greeted with refreshments.
Once the other passengers had boarded, we weighed anchor and headed out. Bob, Edi. Danni and I headed up to the upper deck to get comfortable for the motor over to the islands.
Our first excitement was provided by a mother frigate bird and her chic; now I say chic, but the chic probably had a 5 – 6 foot wing span. The display they put on was quite spectacular, and being on the upper deck we had (excuse the pun) a birds eye view of their ariel display. I took lots of photographs, I was really excited never having been so close before to these birds. They flew around the boat making the most of the wind displacement, even settling upon the boats ariels. It was spectacular to watch. 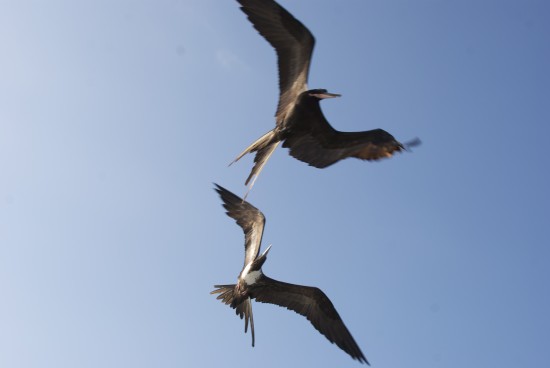 On route we spotted many sea lions, blue foot boobies and turtles. The trip across to Santiago took us just three hours. Once there we grabbed our snorkeling gear and headed over to the island with our guide to enjoy the wildlife awaiting us. 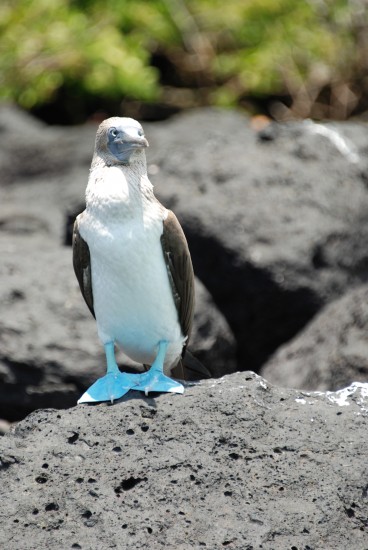 The most exciting part of the day was easily provided by the penguins. They were absolutely adorable, only about 15 -20 inches big. They swam with and around us, Edi managed some great photographs of them with the underwater camera. I wasn’t that impressed with the actual snorkeling, but the penguins were priceless. We were even able to touch them, they were not at all scared of us. I just wish we could have stayed longer.

I got some great photographs of the Galapagos red crab’s. The black lava rocks all over and around the islands are covered at the shore with these amazing crabs, that are bright red, sky blue and brilliant yellow, they stand out like stars in the sky and have to be seen to be believed, such amazing colors, as if they’ve been painted by hand, they really stand out against the black rock. 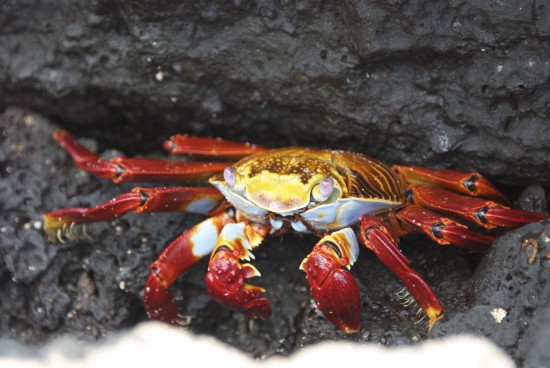 We returned to the boat for lunch and then after a brief rest, we were transported across to the island of Bartolome to hike up to the viewpoint. This island is all lava rock, it looks just how I would imagine the surface of the moon to look. It was all steps up to the top, I gave up half way, letting everyone go ahead, I returned to the landing point and was picked up by one of the boat hands; he motored around the shore slowly, giving me great photographic opportunities of the shoreline birds and sea lions.
Our day tour was over much too soon, and we were quickly on our way back to Baltra, to get a cab back to the bay, where we would rejoin Daisy.

Tomorrow we are off on our three-day boat tour, mini-cruise. Consequently our evening was spent tidying and packing up ready to leave at 7:45 tomorrow morning.

This article was posted in Galapagos Islands. Bookmark the permalink. Follow comments with the RSS feed for this post.Both comments and trackbacks are closed.
© 2022 Daisy at Sea. All Rights Reserved. Design By: Eyeon Media.