Over the last six years of living on a boat I’ve learnt many tricks when it comes to provisioning, such as; never store glass bottles or plastic bags in a fridge, they cause condensation and cause a build up of water in the bottom of the fridge. Never bring cardboard boxes on board, they may contain insects or insect eggs, and once on board you’ll never get rid of them. Keep dry products in airtight containers to keep bugs out. Always store vegetables such as onions, potatoes, squash, yucca and any peelable fruit in a hammock or mesh bag or box so it can breathe. Don’t store onions in the fridge unless they’re cut, and then only in airtight containers. Yes, I’ve learnt many things about boat provisioning over the years, but something I still struggle with is “how much should I buy”? At home my pantry and fridge are always full to bursting, I keep enough food to feed a small army for several months. Don’t ask me why I do that, I couldn’t tell you! On board, I’m restrained (somewhat) by the limited storage space available to me, and yet I still manage to fill every possible space. I’ve been off the boat for a few months now, since September last year to be exact, when I was doing Daisy’s varnish in Grenada.

From November onwards, Bob was working twenty hours a day on the boat in preparation for the start of the Oyster world rally. Two friends, Ted and Mary Alice, joined him in Grenada to help him move the boat north to Antigua where the rally was to start. Daisy’s crew, Edi, Paul and Graeme joined the boat in Antigua at the start of January. One of their assigned tasks was to clear and sort all the food on board. When I arrived in Panama a week ago Paul showed me where provisions were now stored, all very neatly labeled in Tupperware containers. I had rarely seen such immaculate organization it was impressive, and to my way of thinking (although I didn’t tell them so) left much space for more provisions. While familiarizing myself with what was where, I came across a box that confirmed Edi and Paul’s sense of humor, it was labeled “Weird Shit, Avoid”. The box contained things like Agar flakes, dried galangal, flax seeds and other unusual ingredients, rather scary stuff apparently to Edi and Paul.

So, when Paul and I paid a visit to the little grocery store at Shelter Bay I picked up two cans of food to put in my basket and Paul immediately said “Heather, we don’t have room”. My point in mentioning this is; when Bob and I went into Panama City (after Paul and Edi had left) to do the provisioning for the trip ahead, we came back with twenty-six grocery bags, four boxes and twenty-eight bottles… I couldn’t help but giggle when I thought about Paul’s previous horror at my trying to purchase two cans… What would he have said had he seen how much Bob and I came back with? 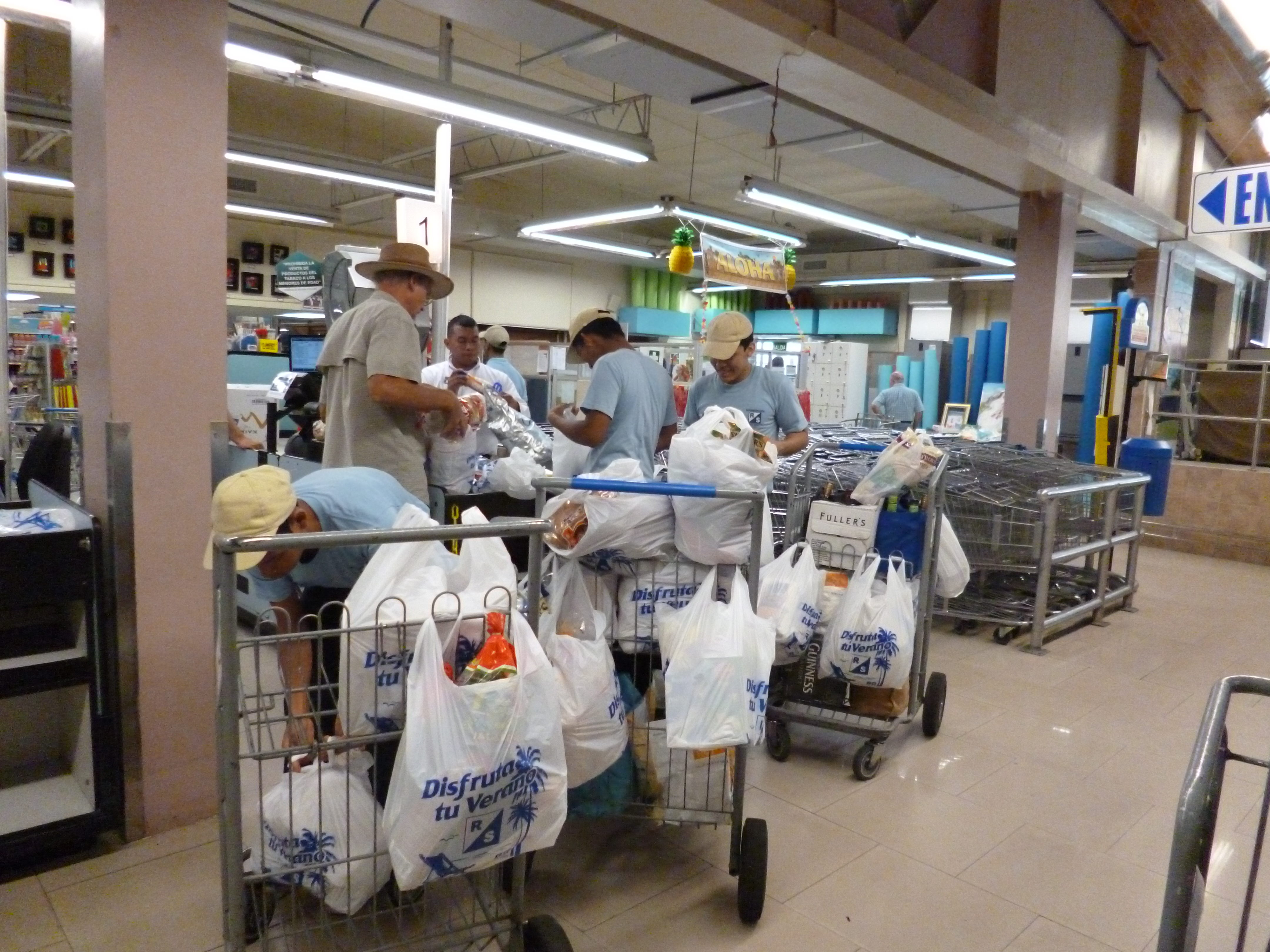 I should mention here that we were provisioning for at least three months, for five to six people. The Pacific islands don’t have supermarkets and grocery stores, so if you don’t take you’re food with you, you’ll find yourself living on fish and bananas…
Our next task, having unpacked everything and completely covered the table, floor, seats and galley surfaces with all the provisions, was, “where the bloody hell do we put it all”? Fortunately for me (or should I say fortunately for Paul), I’m married to the “King of Organization”. We emptied every food storage area, grouped all the different foods together, put a small amount of everything in the galley cupboards, then proceeded to pack and label the rest of the provisions. It took us seven hours, but at the end we were extremely tidy, well organized and equipped with an inventory of everything on board. Hopefully, enough food to last Daisy’s crew three months. Possibly Paul would be impressed, although I’m happy he wasn’t here to see it before it was all stored, it would have had him running for the hills.

If you had asked me, when we got back to Daisy with all the provisions, whether we would be able to store them without using the underfloor space, workshop or surface areas, I would have said “not a snowballs chance in hell”… However, as so often is the case, I was (happily) very wrong.