On To Falaga, Lau Islands, Fiji

Having spent almost 13 years living on Crazy Daisy, and having visited some of the most beautiful and isolated parts of the world, I’ve become a little hard to impress when it comes to Islands, after all they’re just Islands.  Palm trees, white sand beaches, turquoise blue water, what’s not to love, but at the end of the day they’re all much the same, well to me anyway.

Everyone was so impressed with the Bay of Islands, and it was truly lovely, but I just wanted to find a deserted beach.  The water, although clear and clean was dark, and for me formidable, but then everyone knows what a pussy I am when it comes to deep water. 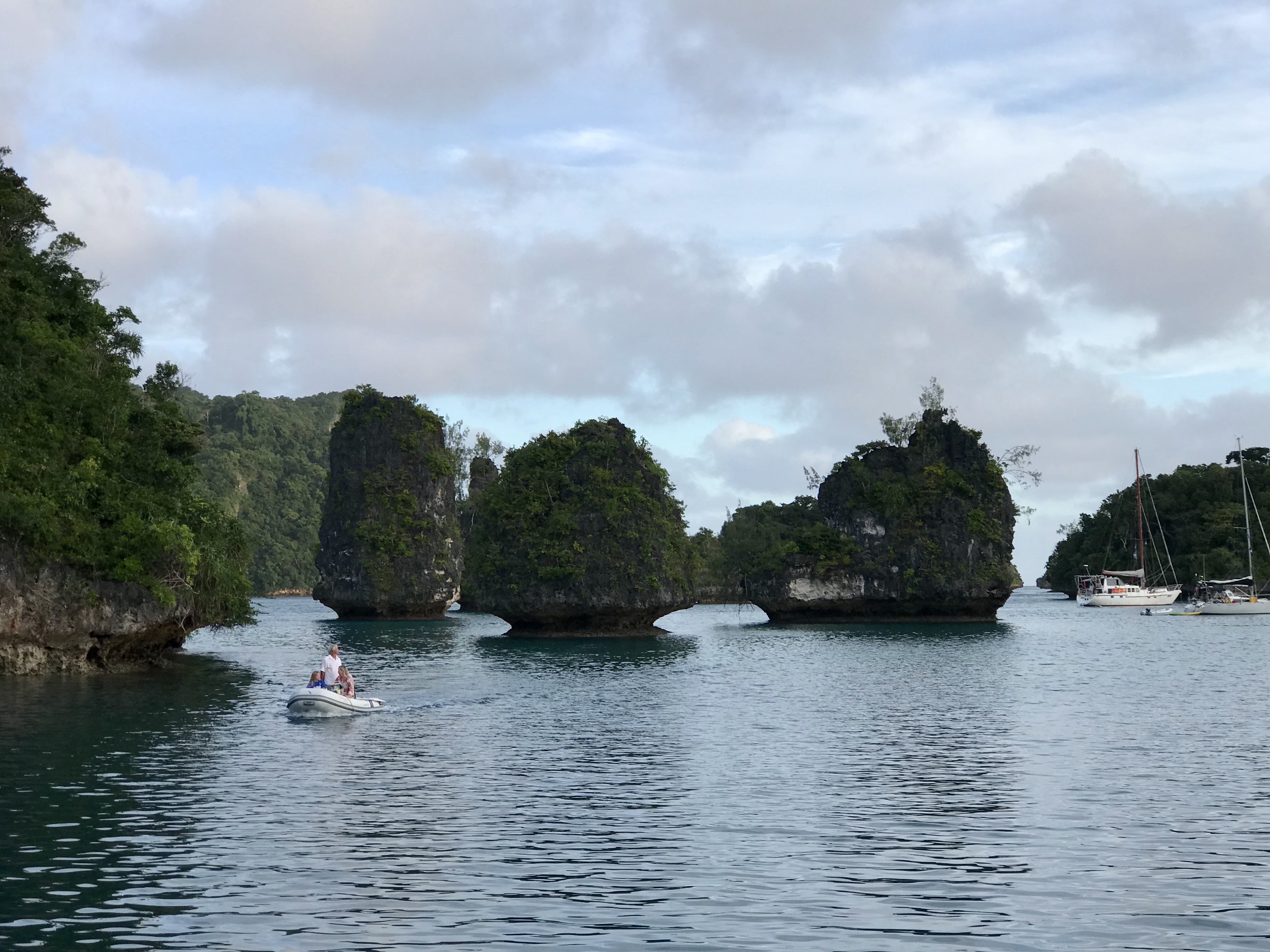 I need beaches. I’m in search of two particular shells, the “Imperial Harp”, which I would be extremely fortunate to find, as it’s very rare, so it’s not very likely, but that doesn’t stop me searching, I’d also be quite happy to find it’s sister shell the “Major Harp”, much more common, but still not easy to find, and in almost 5 years in the Pacific I’ve yet to find one.

The other shell I’m in constant search of is a “Precious Wentlewrap”, apparently it’s not that rare, but still difficult to find, in all my years beachcoming, I’ve yet to find one one of these either…

Yesterday, Tuesday 16th July 2019 we arrived at the foot of the Lau Island chain, Fulaga. The Island consists of an oval rim of jungle covered hills of raised coral around a lagoon about 6 miles by 5 miles.  The entrance into the lagoon was for me, reminiscent of my experience at the “Hole in the Wall” off the Australian coast, no fun, and very scary.

The entrance to the Falaga lagoon is through is a 50m-wide pass, straight but challenging, and apparently very dangerous in bad weather.  We were lucky the weather was calm, but going through the pass was still hair raising, we had 4 knots of current against us, and at one point we were only making 1 knot, with just 4 meters below us, the coral reefs along side us were so close that at one point we could almost have stepped off the boat and onto the reef. 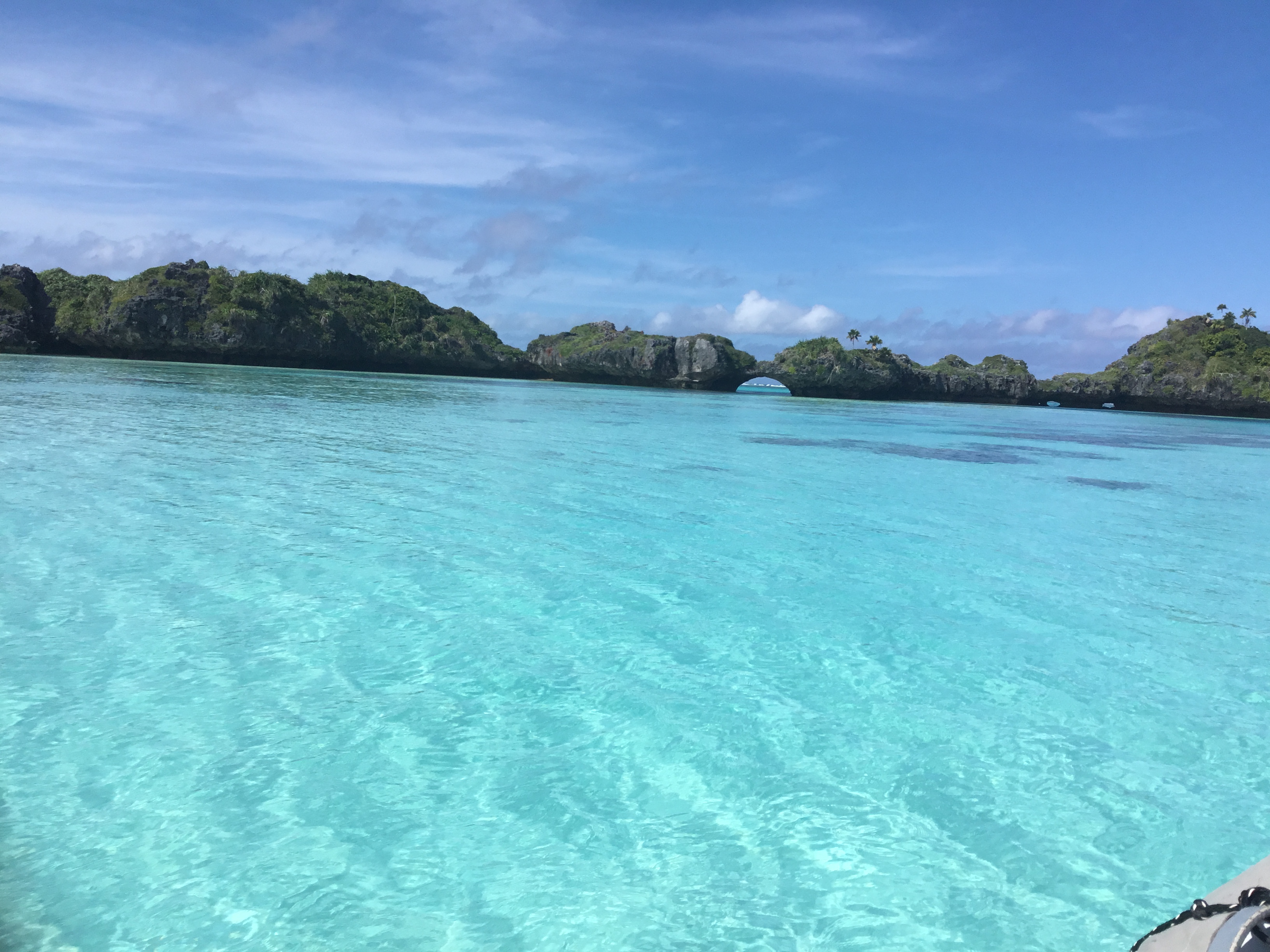 Once safely through and into the lagoon, I was able to look up, I’d barely raised by eyes from the swirling water around us in the pass,  the beauty of what greeted me took my breath away.  As I said at the beginning of this post, I’m not easily impressed with Islands anymore, there was a time when I thought that each Island I arrived at was more beautiful than anything before it, but that was a few years, and a few hundred Islands ago. However, this lagoon of Falaga beats even the Tuamotu’s for me for beauty.  It’s impossible to describe how lovely it is here.  I’m really hoping that some of my photographs will capture a little of the magic. 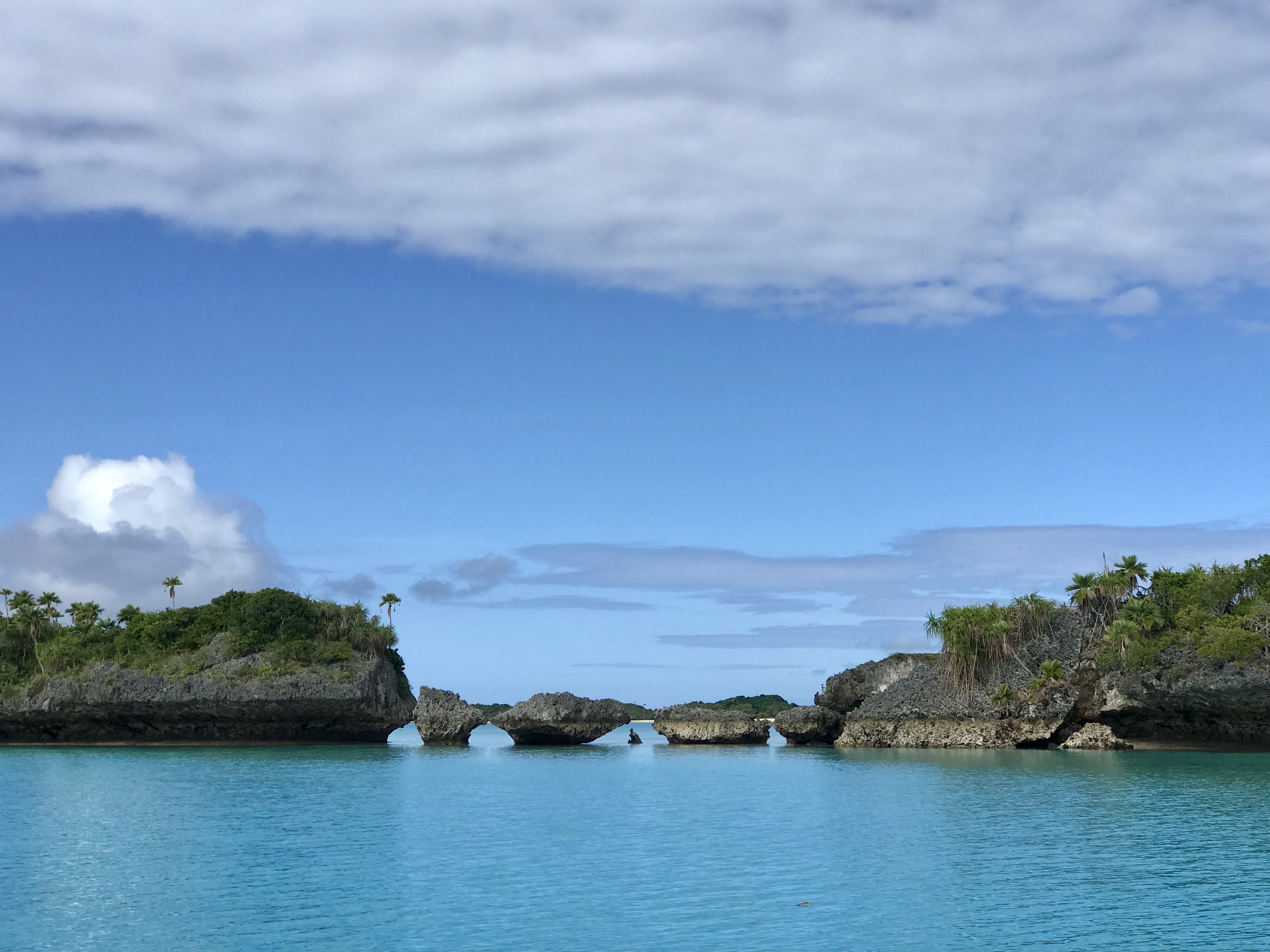 It’s quite remote, and a little more difficult to get to, consequently not many boats come here, although the Chief of the village told us we were the 50th boat to arrive this year, although about 30 of those were with the pacific rally, so I guess its becoming more popular, and more cruisers are making the effort to reach these remote, unspoiled Islands as they’re gradually becoming rarer and rarer.

The one downside, there’s always one, even in paradise, “mosquitoes”!  OMG, there were so many, and even though we were liberally spraying ourselves with the horrible mossie death spray as we walked, they were still all over us.  They bit through my clothes, and buzzed in great numbers around my head, it was hot, humid, and the mosquitoes could not have been worse.

Once we reached the village of Monacake, a local woman, Luci, came out to greet us and escort us to the chief’s hut.  We presented our gift of Kava (see note below) to the chiefs  who welcomed us with the traditional sevusevu ceremony, and afterwards we were introduced to our host family,  where we drank hot lemongrass tea, and ate from the plate of breadfruit and pancakes, I was so grateful that we didn’t have to share the kava, it’s considered rude to refuse but its like drinking dirt. 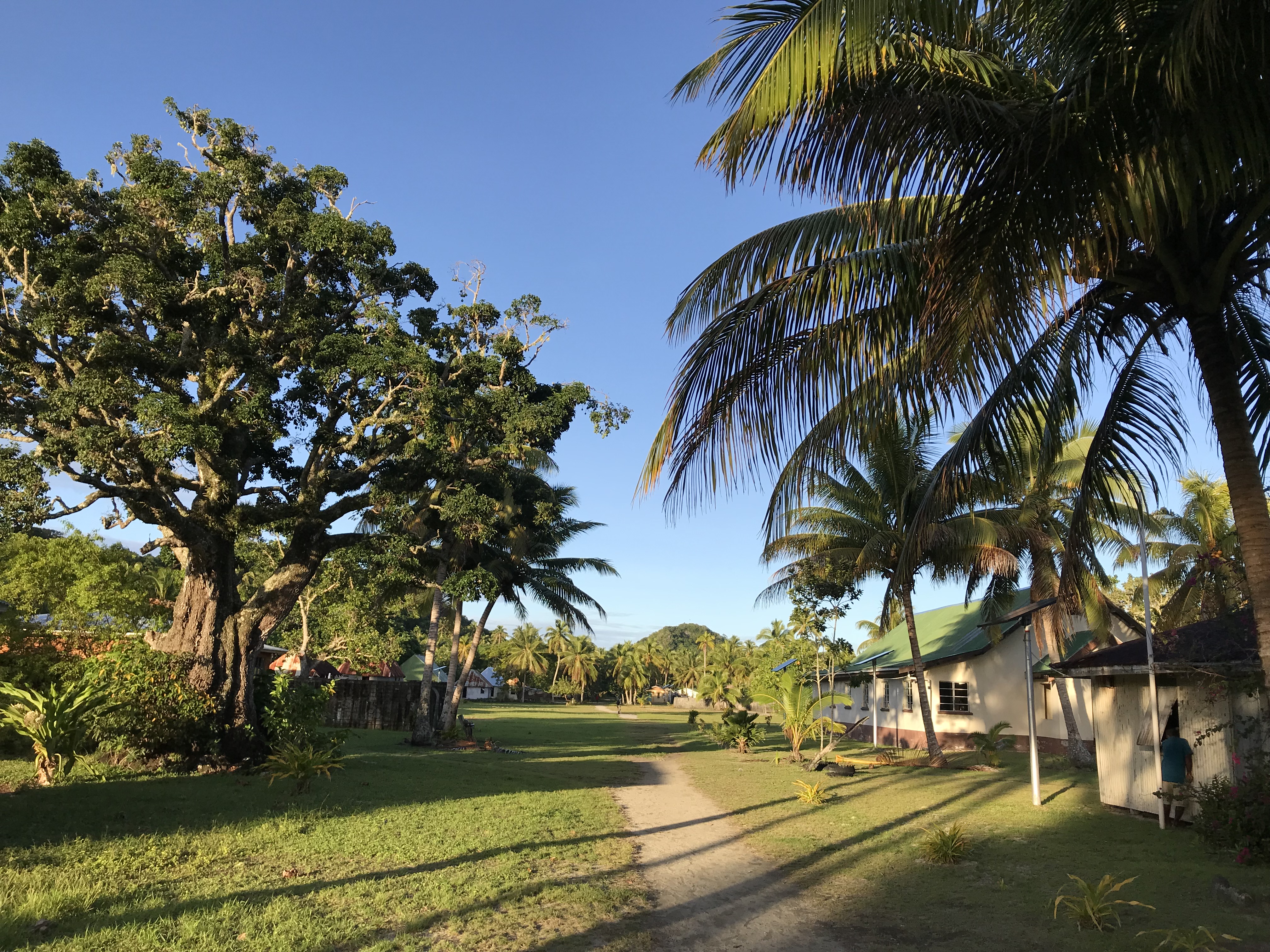 I used my jewelry again to purchase a lovely wooden dolphin carved by the father of our host family, a lovely reminder of our visit here.

The walk, or should I say swift march back to the dinghy was once again through swarms of mosquitoes, Oh and enormous spiders, with nightmarish enormous webs, strung through the foliage next to the path. Arriving back at the lagoon, we met three local ladies from the village sitting on the beach shelling clams, they too were swiping at the many mosquitoes swarming around them. I couldn’t get back to Daisy fast enough, Bob took Whoops-a-Daisy across the lagoon at speed to get rid of any mossie’s that were either in the dinghy or on us.

Back aboard we shut up the boat and turned on the air con, I put a citronella candle and a burning coil out in the cockpit, to dissuade any other mossies that may be headed our way with ideas of a buffet on Crazy Daisy.

The next morning we took the dinghy to explore around the lagoon, the shells were disappointing, all clam shells, not much else.  Walking from the dinghy to the beach, the water was very shallow and the sand was sticky, slippery and slimy with algae, not very pleasant it was like sand colored mud.  Maybe we will discover better beaches on the other side of the reef tomorrow.  The beauty of this place is outstanding but the beaches so far leave much to be desired, and the mossies are the worst…

I have, and always will show respect for the Islanders traditions, but I often find myself asking why they have some of these strange traditions, Kava for example, UGH no thanks….

Kava is a ritual drink, made from powdered roots from the Piper methysticum, a type of pepper plant. The ground up root is wrapped in cloth and mixed with water in a large kava bowl (tanoa), the resulting infusion looks (and tastes) like muddy water.  During a sevusevu ceremony, visitors sit cross legged facing the chiefs and the large tanoa containing the kava, which is drunk from a coconut cup (bilo).  When a cup is handed to you, you must clap once and drink the whole thing down in one go, then everyone claps 3 times.

Kava is a very mild narcotic, following a few drinks  (if you’re daft enough to drink more than one) you may experience a numbness in your lips, and a strong mix can make you drowsy and even disorientated.

This article was posted in In The Pacific, Pacific Rally 2019 and tagged Falaga, Fiji, Lau Islands. Bookmark the permalink. Follow comments with the RSS feed for this post.Trackbacks are closed, but you can Post a Comment.