Our first few weeks in Fiji it seemed as though there was more time spent on fixing the damn water-maker than there was out having fun and exploring!

Bob replaced all the water-maker hoses on Daisy in 2017, upgrading them to new tougher hoses, with a higher psi than was actually required, but, as they say, “better safe than sorry”.  The new hose was quite expensive but we thought it would be worth the money.  How wrong can a person be?  Well we we weren’t actually wrong, but we were wronged!  The hose turned out to be from a bad batch (such is Bob’s luck) and consequently burst in several places, all while we were last in Fiji with Nic & Sam, it almost sunk the boat, twice!  Not a fun experience for anyone aboard, and certainly one I hoped never to repeat.

When we returned to New Zealand in November 2017, we went back to the supplier and they gave us new hoses. At this point I have to add that it’s a long, difficult, back breaking job replacing all these hoses, and to have to do it twice was not much fun, anyway, to cut a long story short, all the replaced hoses must have been from the same faulty batch as before, as they too have burst over and over, requiring Bob and Glenn to spend many hours replacing all the broken hose parts with other hose.  Now finally, (although I hope I’m not jinxing myself by saying this) we have a fully operational water-maker producing 10-11 gallons and hour, and so far we have a full tank of water and no more burst hoses.

Sadly, much of our time spent in the beautiful Bay of Islands, Fiji, was spent on fixing the water-maker hoses, but we couldn’t manage without water, so what else could we do? It’s just more evidence that boat life is simply  “maintenance in exotic places”.

I quite liked the Bay of Islands, it was beautiful, and watching the thousands of Fox Face Bats take off from the trees every evening was truly amazing to see, but honestly I was a little bored but, (yes, ok, I know I’m spoilt) there were hardly any beaches  for shell searching (my favorite thing to do in the Islands),  and there was nowhere to walk, I just didn’t fancy the snorkeling, despite everyone saying how fantastic it was. So after the first two days when all the other boats had left, I was a bit fed up. This photo by Glenn was the only beach we were able to reach in the dinghy, it was lovely, but quite small. 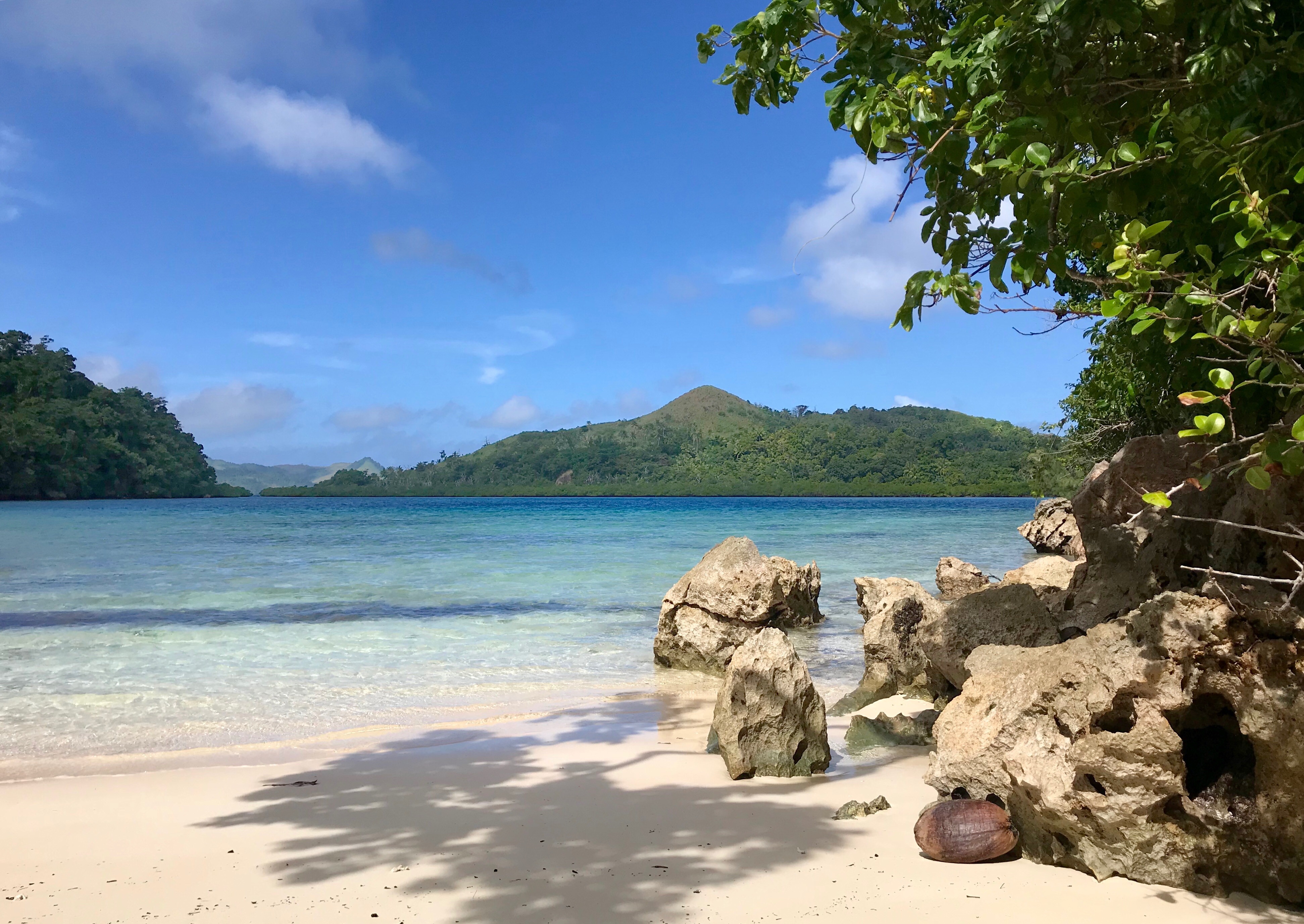 After five days in the Bay of Islands we went back to Lomaloma Bay to get a few much needed, essential supplies, flour, yeast, eggs, and of course Bob’s favorite ‘baked beans’ (absolutely essential), Oh and let’s not forget Ice cream.

I took a walk along the beach in the bay this morning while Bob and Glenn were making yet another fix of the hoses, and I found some really beautiful Tiger Cowry shells. Thankfully unoccupied ones 🙂 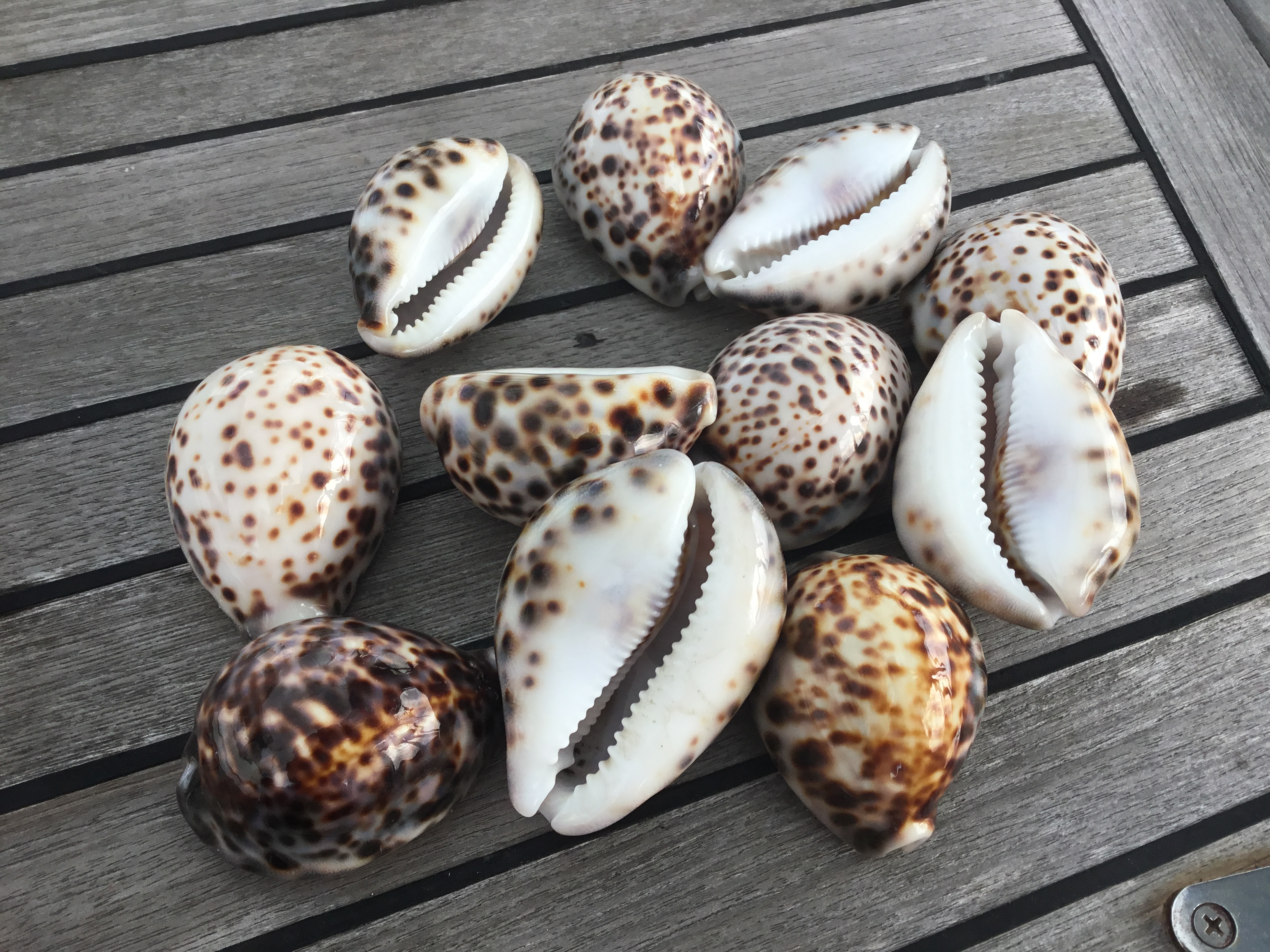 My little shopping excursion used up the last of our Fiji money, so I traded some of my fresh water pearl jewelry for a sightseeing trip around Vanua Balavu Island.

Tevita (otherwise known as David) was our tour guide, he and his family have the little store on the front in Lomaloma bay, and his brother Charlie, is the acting Chief of the village.  We were taken to David’s home to meet his wife Alumita, and enjoy a cup of coffee before we headed out around the Island; there were no roads, just dirt tracks, so the drive was incredibly bumpy, and we were tossed around in the truck like clothes in a tumble dryer,  but the scenery was lovely, and it was good to actually see more of the Island and the other villages.

Bob’s back is still recovering!

This article was posted in Pacific Rally 2019, The Pacific and tagged Fiji, Lomaloma, Tiger Cowry Shells. Bookmark the permalink. Follow comments with the RSS feed for this post.Trackbacks are closed, but you can Post a Comment.