Thursday March 14th
The bell rang at 6:50 again to announce breakfast. I’ve only had two breakfasts on board Fragata so far, but it’s been enough to know not to get excited about it. This morning was sadly no different; we had cold fried eggs, and luke warm bread! I’m actually beginning to get a little angry, breakfast is not a difficult meal to fix for 10 people, I could do it in my sleep, this is a case of extreme laziness. But what really rubbed salt into the wound was when we could see through to the bar lounge where the crew all had plates of steaming hot food (literally steaming).

Instead of feeling like a paying guest I feel more as though I’m hitching a ride. The crew, while pleasant and friendly, lounge around the bar watching TV and laughing loudly.

The truth is I’m not that hard to please. Perhaps I have too high standards! I have many friends that work as crew on mega yachts, and I’ve come to understand from them how they behave, and how they treat their guests. I didn’t expect caviar and champagne on this trip, but I certainly expected more than cold fried eggs, warm beer and watered down fruit juice…

So, anyway enough of my bitching about the crappy food…

This morning we were taken across to Bahia Ballena, where we hiked around the base of a volcano, and attempted to avoid the millions of spiders that had webs everywhere. We spotted a few wild giant tortoises, and some Galapagos flycatchers. We then arrived back on the beach for some snorkeling. The surf was quite rough and the water too murky for snorkeling, so I spent my time with my camera photographing all the fabulous sally-lightfoot crabs, I’m blown away by their amazing colors.

After about half an hour it started to rain, we put our cameras away and made attempts to keep them dry. The rain just poured and poured, the skies grew darker and the rain heavier, we were all thoroughly soaked through to the skin, stood there on the beach waiting for the boat to come and pick us up. We waited for an hour cold and wet. Danni and I were really mad as we were worried about our camera’s. No attempt was made to come and pick us up early because of the bad weather, we were simply left ashore until the allotted pick up time!

Eventually they arrived and we all sloshed aboard, the crew were making a fuss about us washing the sand off us, I couldn’t care less about the amount of sand I was bringing aboard, I was so angry, I didn’t care if the sand blocked all their drains. I was not happy!

Another “delightful” lunch awaited us more rice, potatoes and something else which looked like overcooked pieces of meat in a gray sauce, I left it and just ate salad and potatoes. Desert was once again a small slice of watermelon!

In the afternoon there was a trip ashore planned to Cerro Dragon to see the land iguana’s. Although it had stopped raining the skies were still black, and I didn’t want to risk another soaking, so I stayed aboard to sleep and read. This is when I realized why we were left ashore; once the guests leave on the tours all boat systems are shut down, it gives the engine and generator a chance to rest. They are turned back on just before the guests return. 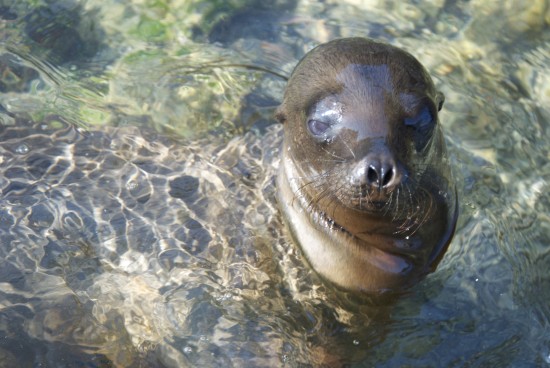 Our agenda had promised a trip to the islet of Eden, to observe the Nazca boobies, blue-foot boobies, and a snorkeling opportunity to see octopus, sharks and other species. However, that trip didn’t materialize either. 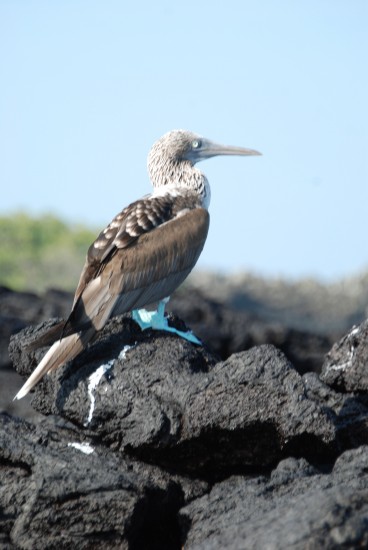 Bob, Ed and Danni returned late afternoon with film of the land iguanas, they said it had been a worthwhile trip, and it hadn’t rained either.

Dinner was just more of the same… but we washed it down with some “COLD” beers and a bottle of wine. One exception was that “chef” made a farewell cake for us. Finally, on the last day, some small effort from the galley.