Friday March 15th
The bell was very early this morning we were going out at dawn to catch the wildlife, and then returning for breakfast later. Unfortunately both Bob and I were both suffering from horrible stomach upsets. I was doing much better than Bob, but we still went, we had a boat to ourselves which was a relief because if we were unwell we could come back without disrupting the rest of the group.

Our trip was around Black Turtle Cove, on Santa Cruz. The water was full of juvenile black tip sharks, the mother sharks come into this bay to give birth, the shallow water keeps the young sharks safe from predators. We saw giant spotted eagle rays, golden cowface rays and several species of turtles.

We came across a couple of turtles mating and Danni and I got some great photographs. Our guide paddled the boat around the hidden lagoons within the mangroves for over an hour until the sun came up and it was too hot to stay out. 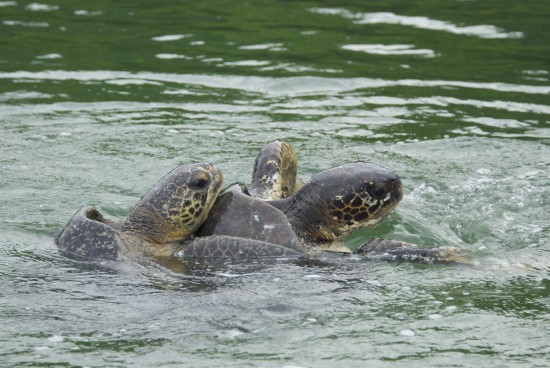 We then returned to Fragata for our last breakfast aboard. The scrambled eggs they served were probably the best thing we had eaten in the last three days.

Bob was starting to feel and look really unwell. Our cruise was over but unfortunately there was no fast way back to Daisy.
We were taken ashore with the rest of the group and transported to the airport where we were left standing in the searing heat until transport was arranged to get us back to Daisy, this involved a bus ride, a ferry ride and then a cab ride, by the time we arrived back on Daisy, Bob had turned quite gray, he fell into bed and stayed between the bed and the bathroom for the next 48 hours!