Today we start our cruise of the islands, on the motor yacht ‘Fragata’. It had been arranged that the crew would collect us from Daisy at 7:45 this morning. Following quite a late night of frantically packing and getting the boat ready for while we’re away, we were all a little tired.

In Admiralty bay where we’re anchored it’s incredibly rolly, Daisy rocks constantly tipping from side to side, at times at about 45 degrees, it’s quite exhausting, I’m permanently dizzy and covered in bruises from falling into things each time I lose my balance. I was looking forward to moving, all-be-it onto another boat, but at least we would be heading out, hopefully to a less rocky anchorage.
At 6:20am we heard someone calling Daisy’s name. Ed and Bob went up on deck to see who it was.

A crewmember from Fragata was calling to pick us up! An hour and a half early (not funny this early in the morning)! None of us were ready, we were still in our pajamas, and hadn’t even had breakfast. Sadly the crewmember spoke zero English, so Bob wrote “7:45” in large numbers on a piece of paper. The guy didn’t seem very happy but that was too bad. About ten minutes later he returned with another crewmember from Fragata that spoke a little English, and Bob was able to make him understand that we weren’t ready and that they should come back at the agreed time of 7:45. They didn’t appear very happy but agreed anyway and returned to Fragata, leaving us to get dressed and eat breakfast. We were collected at 7:45, and transported over to Fragata where our bags were taken aboard, and we were taken ashore for our first tour.

The first item on the agenda was a visit to the Charles Darwin Research Station, where we learnt about the preservation and breeding program for the giant tortoises. Lonesome George, the famous one hundred year old, last remaining Pinta tortoise, died in June 2012. I’ve read and heard so much about Lonesome George I was really sad to have missed seeing him, and by just less than a year.
He was discovered in 1971, and transported to the Tortoise center on Santa Cruz. All efforts over the years to get Lonesome George to reproduce failed. So the Pinta Tortoise is now sadly extinct. The Charles Darwin research station is an international non-profit organization for scientific research in the Galapagos Islands, in operation since 1959. 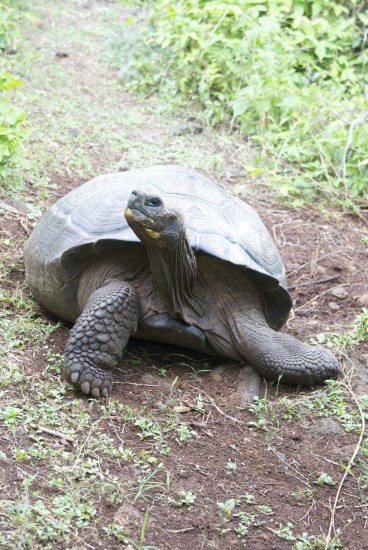 We saw lots of the pretty little Darwin finches, they don’t appear to be at all nervous around people, and would fly quite close landing right at our feet, or on nearby branches. 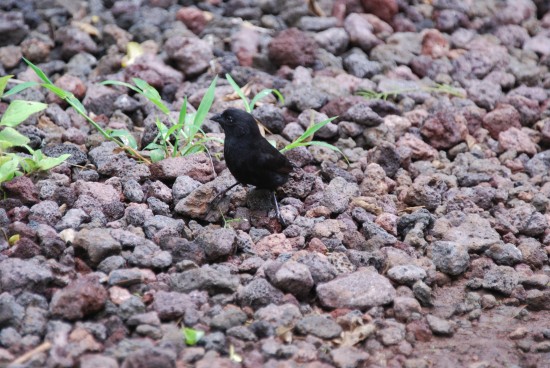 I loved the bright yellow cactus flowers ‘Opuntia’ they flower for just one day. The Giant Opuntia Cacti is the tallest cacti in the world reaching a height of 50 feet. I stayed well clear of them, I was quite nervous of the long needle like thorns. 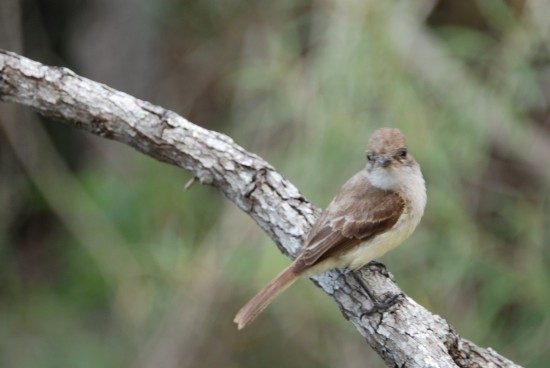 After our trek around the Darwin center, we walked through the town shopping, and found a very exciting store selling some lovely hand made jewelry from the local lava rock. Danni and I each bought ourselves a piece of jewelry, as well as something to take back for Nic. The shopping here on the island is quite good. The stores are lovely; with many unusual locally hand crafted items and artwork. I’ve been so surprised by the island, it’s not at all what I expected to find here. If you are in any way interested or intrigued by art or nature, this is absolutely without a doubt the place to visit.

We stopped at the sea-front fish market, this was entertainment at it’s best. The fishermen fillet and clean the fish for the customers, while the sea lions, iguanas, pelicans, lava gulls and frigate birds stand alongside them, cleaning up the guts and fins. They all appear to work together as a team and it’s absolutely fascinating to watch. It almost appears like a circus act, you have to keep pinching yourself so you know you’re not dreaming this. 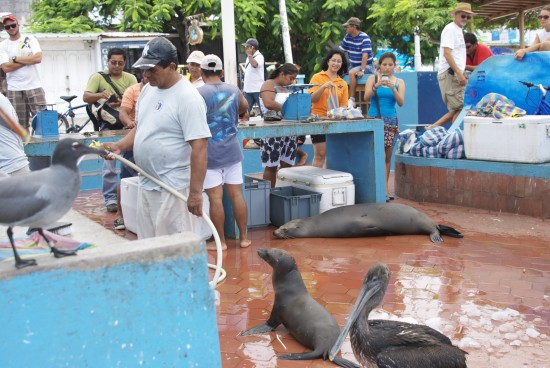 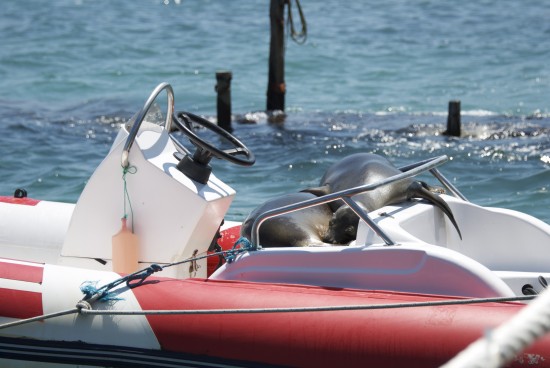 Sea Lions scrounging a snooze on a dinghy

Back on board our rooms were still not ready so we sat in the lounge and waited. Bob ordered a beer, only to be told there were no cold beers, they had only just been put in the fridge, but he could have a warm one!
Eventually lunch was served; it was some sort of fish (I’m not sure which) with salad and rice, and a fruit juice. After lunch we were finally able to go to our rooms and unpack. The rooms were small but very clean; our bathroom barely had room to turn around, making our bathroom (or should I say ‘head’) on Daisy seem positively palatial! The light was no brighter than a candle (no exaggeration), Bob said he probably wouldn’t be shaving for a few days, and I certainly wouldn’t be putting on any make-up. Bob and I are both as blind as bats at the best of times, so the bad lighting wasn’t helpful.

More guests joined the boat after lunch, making us a group of 10. In the afternoon we were all transported ashore to ‘Hacienda Primicias’, the Tortuga center (again) this will be our third visit. We did however; go into a different entrance to see another area. We donned our wellies (again), and spent about an hour searching for tortoises, cattle egrets, mockingbirds, flycatchers and finches in the shrub, while our guide Harry, gave us a detailed description on each species. 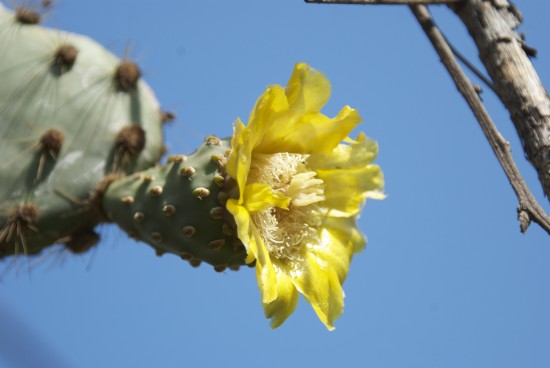 At 6pm we were once again back on board to meet our crew and have a complimentary a cocktail. The cocktail looked exactly like Pepto Bismal, bright pink and creamy, I’m not really a lover of cocktails, unless it’s a margarita (and then only when its made well). The thick creamy cocktails have never been something I particularly enjoy, and this bright pink gloopy looking stuff was so sickly sweet; I wish I could say it was delicious, but I can’t… I was unable to drink it, fortunately Harry picked mine up mistaking it for his, so at least I didn’t have to offend anyone by leaving it.

Dinner was quite a disappointment, other than the friendly service from Enrique, it was buffet style, salad, rice and potatoes with fried shrimp, not quite enough for 10 people, unless we had just 4 or 5 each (they were quite small shrimp). The desert was one canned peach half!!! I have to ask, honestly, who serves a canned peach for dessert? Maybe desserts aren’t big in Ecuador; Bob keeps reminding me that we are experiencing a different culture, and I shouldn’t be so critical and picky. Although we could hear the other guests complaining, they were French, but as we all speak and understand French we heard what they were saying.

We were all still really hungry when we had finished eating, so Bob asked for some cheese, we were brought a plate of some sliced cheese, it was actually quite tasty, and the wine was OK, so it wasn’t a total loss.

We leave the bay at 10pm to motor overnight across to Isabela, I’m really excited to see another island. I couldn’t help wondering why we were leaving at 10pm and motoring overnight, rather than setting off as soon as the guests were back on board. It would mean that we would have the noisy engines running all night! I had my answer later that night. After everyone had retired to their rooms, I went back down to the dining area to sit and write my journal. While I was sitting there I saw a couple of ladies and children being lead quietly on board, they all looked at me nervously as they quietly scuttled out of sight, I couldn’t help feeling that I wasn’t supposed to see them. About five minutes later (10pm) we were underway. I imagine we were waiting for our mysterious guests, but of course that’s just me, always looking for the mystery in everything.