All the air has been knocked right out of me by the breathtaking beauty that I’m engulfed in at this moment. I’m seriously struggling for words to even begin to describe what I’m seeing and feeling, I couldn’t begin to do it justice…

We’ve taken hours of video footage and hundreds of photographs, but they can’t begin to capture the feeling of immense beauty, peace, vastness and sheer magic that we’re currently floating through. I feel so incredibly small right at this moment, like an atom floating through an immense atmosphere.

There really can be little else on earth to compare with this. The indescribable beauty of the magnificent pacific is truly spectacular. 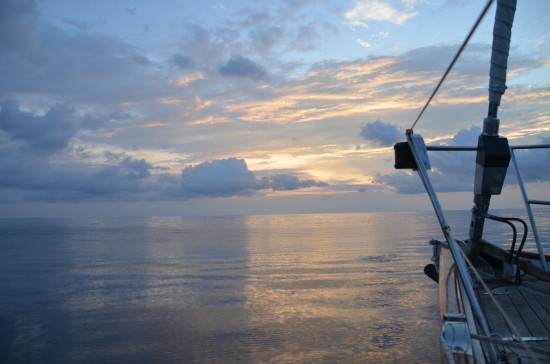 As we glide forward through this silky sea of tranquility, to the haunting sounds of Enya coming through our sound system, the wind against my skin feels as though I’m bathing in silk. The only sound other than Enya is from the softly splashing waves of Daisy’s wake. 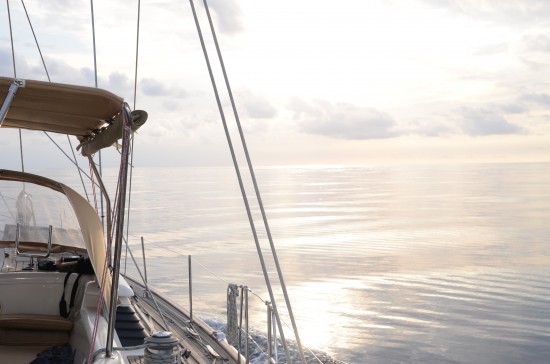 The setting sun casts warm ribbons of shimmering color through the gentle scudding clouds and out over the tranquil ocean. I sit mesmerized on Daisy’s raised cockpit roof under the sails, and just breathe in the beauty around me. To imagine that I could have missed this is unthinkable. 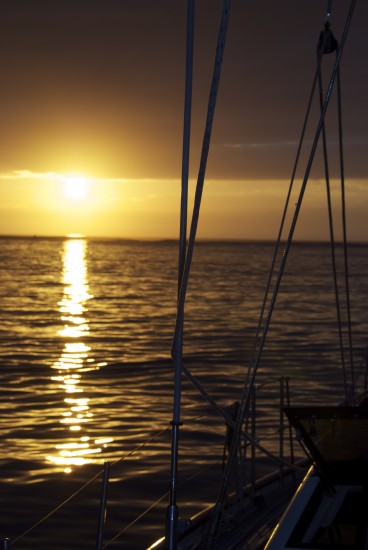 There’s nothing but silky blue sea and sky as far as we can see, we’re floating over thousands and thousands of feet of water. I have truly never felt so special or so small, as corny as this may sound, the immense beauty of my surroundings almost brings tears to my eyes.

A couple of sea birds appear as if from nowhere and swoop playfully around Daisy perhaps looking for a temporary resting place. A couple of flying fish pop up here and there disturbing an otherwise unbelievably still ocean, they take flight for incredible distances skimming the surface before disappearing again. Dolphins appear and then disappear again just as fast, causing you to questions whether they were actually there, or you just imagined them. An occasional turtle basking in the late afternoon sun, spots us as we approach and dives below leaving behind only a ripple on the surface to suggest it was once there. It’s all so peaceful, un-spoilt and beautiful.

Reading through this I realize that I’m failing miserably in my attempts to describe it here, I would so love to share my experience, but I just don’t know what words to use, I’m totally at a loss, this much beauty is impossible to accurately describe…

This article was posted in On Route. Bookmark the permalink. Follow comments with the RSS feed for this post.Post a Comment or leave a trackback: Trackback URL.