Tuesday 19th April, 2016
Since Louis left to return home, we’ve been hard at work completing all the “unfinished” and “must do” jobs around Daisy. Bit, by laborious bit, we are finally making progress. It took me the best part of two weeks to clean up the inside of the boat and get all the laundry done, we arrived here three weeks ago in the most horrific mess the boat was untidy, disorganized and just really messy. Now she is immaculate again, every inch cleaned and polished, cupboards organized, provisioning stored tidily. Our third cabin is still working as a store room, although a much more organized store room.
We found a little more time to socialize and have met some lovely people and made new friends. Alan and Sue are still out touring the other nearby Islands on Babe (Paul & Trish’s Oyster), something Bob and I are looking forward to doing very soon.

This week another Oyster arrived in the bay, “Reya” with super nice people Rick and Roz. They came over and introduced themselves and we’ve spent some time together since getting to know them. This morning we took turns helping each other refuel, not the easiest of jobs, stern too on a high concrete dock with the tide out, but we were blessed with calm weather, quiet water in the bay and light winds. With all the extra help it wasn’t as bad as I thought it was going to be.

Time for my “Soapbox Special”
Yesterday we all took a tour of the Island together, a trip I will remember for a very long time for the spectacular scenery. Nuku Hiva is the most beautiful Island I’ve visited so far. The very noticeable difference for me was the order and cleanliness of the Island; I’m used to the Caribbean, where the abundance of ramshackle, partially built, deserted structures, debris and mess, ruins what would otherwise be really beautiful. With exception of Mustique, Bonaire and St.Barths, where (admittedly there is more money) the people really take care of their Islands, but the mess is due to laziness not lack of cash. Nuku Hiva really couldn’t be more different from the Caribbean that I’ve come to know over the last fifteen years. And I won’t apologize for saying this, but the term “Island time” is just an excuse for laziness. Here in Nuku Hiva, people work hard, but they have “siesta” so between 11:30am and 2:30am they can rest or just take time to themselves, the rest of the time, they are all busy with something.
“Off the Soapbox now” 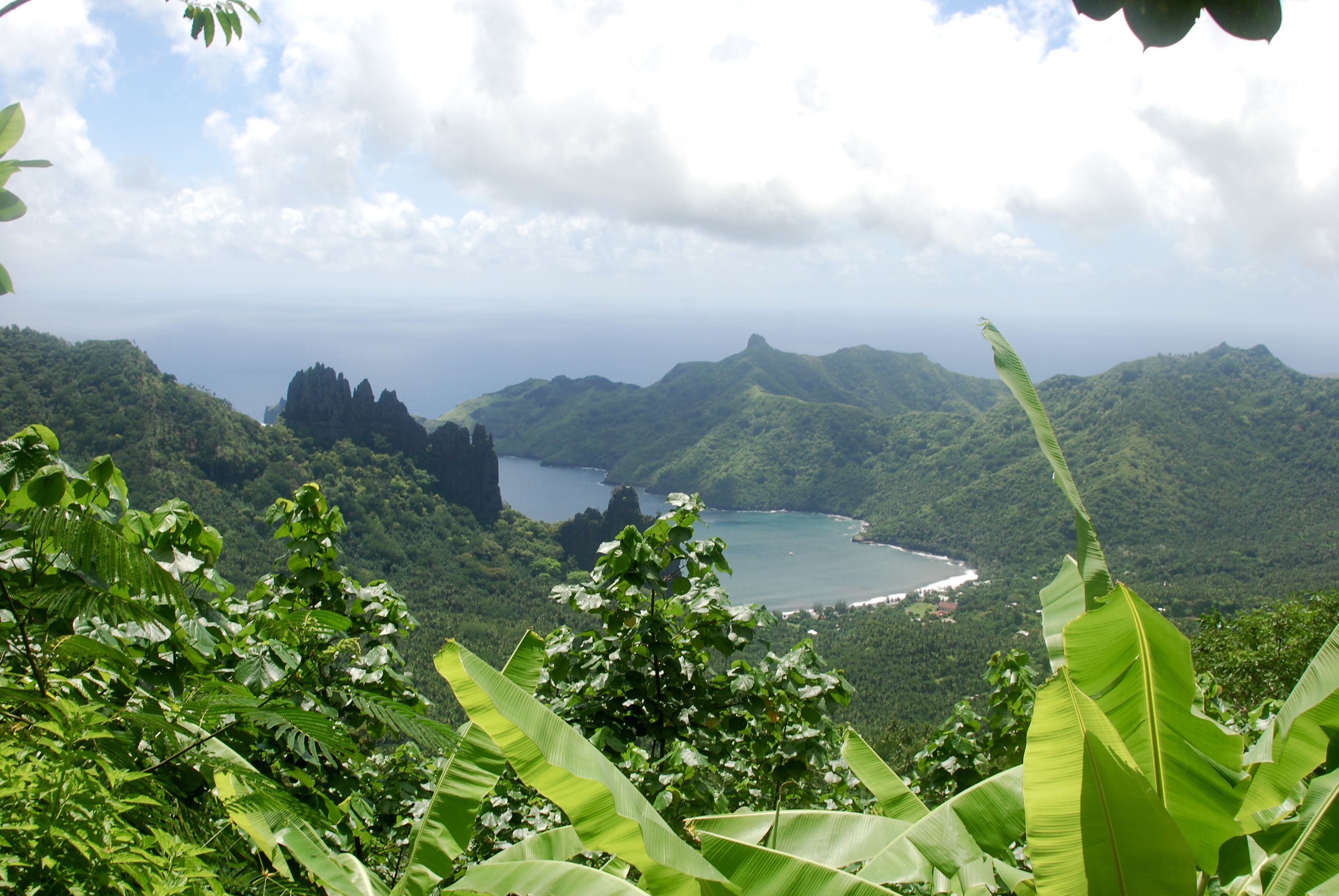 There are no partially built constructions here, no falling down structures, other than the historical ruins of the archeological sites. There is also no crime here, or at least nothing serious. The people are friendly, honest, helpful and happy.
Every house, from the richest to the poorest, whether its a large dwelling or a tiny one- bed abode is immaculate; the gardens and roadsides are all tended, all the hedgerows, shrubs and trees in the villages and along the sides of the road are pruned, cut back and tidied. Every Islander is out sweeping up leaves or working on their gardens or doing something productive. The people here take such great care of their properties, and they are all so proud of their Island, it was a surprise and a delight to see.
Due to all the rainfall and the volcanic soil, everything grows with the ferocity of triffids. However, having said that, everything is seasonal, selection is limited due to the strict controls applied to imported foods and plants. There are no pesticides, hormones or chemicals used here to propagate or speed grow, so the produce is all deliciously healthy and GMO free. Right now Pamplemouse, Papaya, Star fruit, Bread fruit and Guava are abundant, bananas and plantain are available all year round, but sadly for me Mangos, Avocados and Pineapples are not in season again until July. Tomatoes are like gold dust (they are difficult to propagate due to the heavy rainfall). You just have to adjust to what is available, and honestly I’m happy to do that just to know that everything is grown naturally. Other supplies are delivered by boat once a month from New Zealand and Tahiti.
Our tour took us to the North side of the island, stopping at all the amazing vantage view points where we were able to take photographs and pick Star Fruit. We saw such enormous Banyan trees its difficult to describe them, we took photos of each other standing in front of them, but it was still hard to appreciate the actual size in a photograph. Our guide, Richard, pointed out that they were around 600 years old, although he wasn’t sure of the date accuracy.
Wild horses, pigs, chickens and cockerels roam everywhere freely. There are no natural predators to the wildlife, or the birds, so everything lives happily.

Richard pointed out many of the local birds, and told us about the Marquises Pigeon, endemic, only about 200 left, we were all delighted when one flew into a tree right above us, he explained that it’s the largest pigeon in the world, I had to bite my lip to stop myself arguing with him, he hasn’t seen the pigeons that visit my Mum’s garden in the UK, they’re bigger than Chickens! However, it was a privilege to see such a rare endangered bird so close. It was about the size of a large crow (admittedly larger than most pigeons), black with a smallish head and a long curved beak, a little like a curlew’s.
We visited many sites of historical, archeological interest where our guide pointed out all the flora and fauna, also the ancient Priest and Chief buildings remains, and the “bone pits”, scary deep holes that were used to store bodies (alive and dead) until needed for food and the removal of their heads. The heads are considered sacred as they contain the eyes to the world, the soul and the mind, the Islanders believed that whoever removes the head and eats the eyes, gets that persons vision, brain and soul, a scary thought. I wasn’t that interested in looking too deep into the pits where some of the skeletons still lay, but between being half blind without my glasses and blonde, I wasn’t too worried abut being thrown in… Fortunately for many the missionaries put a stop to the canabalisim several years ago. Although I did hear that when a human body is baked over a fire on a spit, its referred to as “long pig”! Fires burn here up and down the side of the mountain slopes all day, I tell myself its people clearing their yards, but now I can’t help but wonder?
At lunchtime we arrived at the tiny little village of Hatiheu, right on the shore, with a church, town hall, restaurant, school and museum, a small gathering of houses and the most breathtaking views of enormous volcanic peaks towering over the bay. One of the peaks had a carved statue of Mary Magdalene right at the top, the mind boggles imagining how they got that up there!
The restaurant was much more sophisticated than I was expecting considering the remoteness of the location. Three of us ordered the grilled fish and one, a Prawn Curry. The sides with the fish were lovey, little fluffy fried balls of breadfruit a salad of cucumber and tomatoes and mashed taro. The fish was unfortunately rather overdone, so a little rubbery, but the sides were delicious and the setting was delightful, our table was a stones throw from the beach with waves crashing onto the shore. You couldn’t wish for a better location. 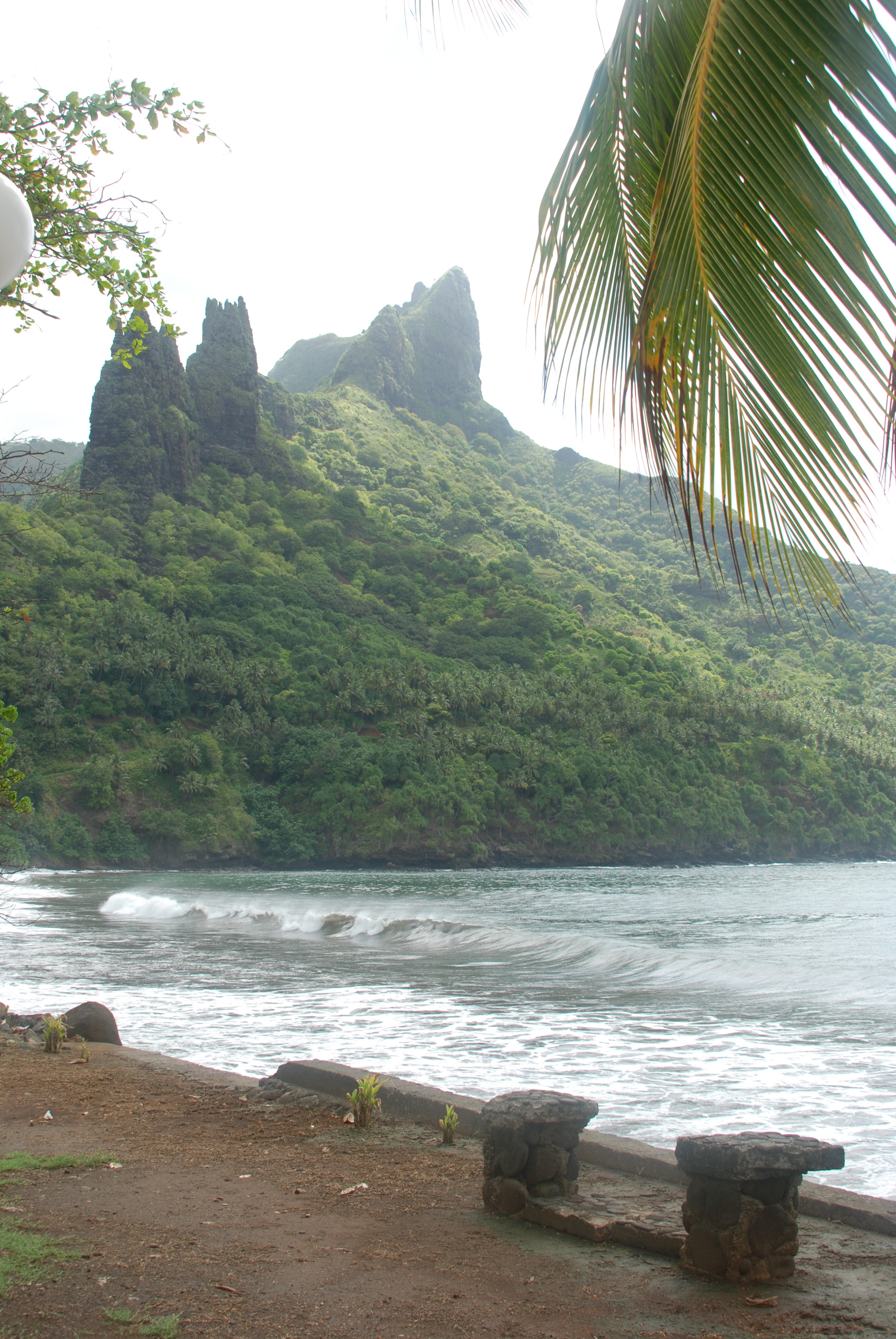 After lunch our tour guide took us to see the tiny museum, before we started our journey back. This has to be one of the best Island tours I’ve taken, if only for the amazing, breathtaking scenery.
For anyone visiting the Island of Nuku Hiva I would highly recommend Richard if you want to learn about the history of the Island and see some pretty amazing scenery.
Temarama Tours, #87 28 08 36 or 87 74 86 78