Thursday March 7th
Our day started with the arrival of Noddy who had apparently forgotten our paperwork! I’m not quite sure why he came all the way out to tell us that he didn’t have what he should have brought with him! He said he would be back a bit later, but if past performance was anything to go by we would probably be wasting an entire day waiting. So we decided to get off the boat and tour the island.

As we boarded the water taxi the heavens opened with a torrential downfall. It does, apparently, rain here a great deal which I can believe from all the colorful flora and fauna that grows everywhere in rich, lush abundance. We arrived at the dock dripping wet. The pretty little town of San Cristobel has a seafront crowded with sea lions; you practically have to step over them to get around. While the sea lions are really pretty, their enormous piles of poo and subsequent eye watering odor is not.

Noddy’s side kick Big ears, had organized a day trip for us. So we all piled into the truck that was waiting for us on the shorefront and set off through the town. Bob had requested an air-conditioned vehicle, with an English speaking driver, however, somehow quite possibly “lost in translation” the request was overlooked. Due to the heavy rain the windows were up and the inside of the truck with four hot sweaty bodies quickly became a sauna. Ed and I were absolutely dripping in the back of the truck, it was unbearable. Also the driver spoke no English. Bob complained mostly with sigh language about the lack of air conditioning and demanded that we be taken back to the shore to find Big-ears. A short search of the little town revealed Big-ears whereabouts and another truck was quickly located.

Our new driver was a very pleasant young Ecuadorian gentleman, with unfortunately no English, but a comfortable air-conditioned vehicle. We headed out of the little town towards our first stop; a dormant volcano that has a large lagoon in its crater. We made the sweaty hike up to the rim of the crater, where we were able to admire the stunning views of the island and surrounding ocean all around us. As we made our decent the heavens once again opened and down came the rain, the driver and I being a way ahead of Ed and Bob just made it back to the truck before the heaviest rain. Bob and Ed were left at the top of the volcano cowering under one of the large information boards.

Our next stop was the giant tortoise preservation and breeding center, where we were able to walk around and see the enormous tortoises, it’s really difficult to comprehend the size of these creatures, we also saw the breeding pens with the tiny baby tortoises, and the hatchery where the eggs are incubated. We spotted a few of the famous Darwin finches; cactus finches, small-billed tree finches and the large-billed ground finch. I took some photographs of the beautiful flowers growing wild throughout the grounds. It was interesting to learn that each island in the Galapagos has its own individual breed of tortoise. 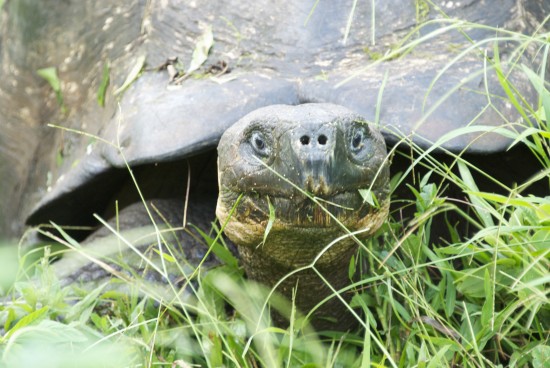 From the tortoise preservation center we headed to our next destination stopping along the way at a little restaurant to get some much needed liquid refreshments.

The roads around San Cristobel are not the best, they’re rough hewn lava roads with huge pot holes everywhere, and we were rattled about until our teeth shook, but the opportunity of seeing this lovely island up close and personal made up for the rough ride. We stopped to take photographs of the smooth-billed anis, a large black bird with a large finch type beak. 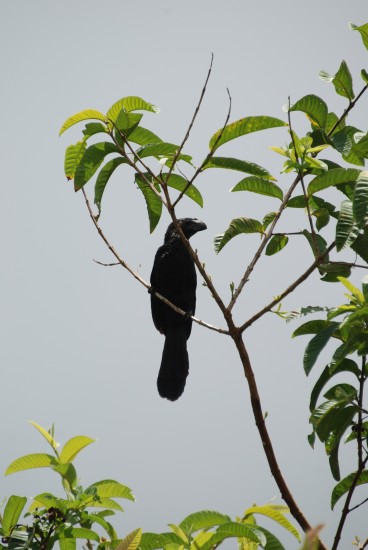 Our next location was something I didn’t expect to see in these islands, ‘a tree house’. It was built in an amazing tree in a local garden. We climbed the swinging bridge to reach it and found it had a teeny-tiny kitchen, seating area, working half bath, and a loft with two sleeping areas, quite amazing. 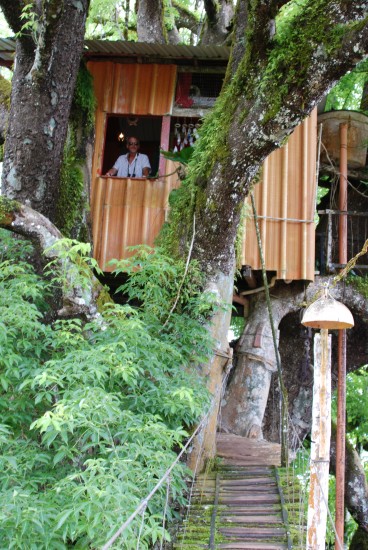 Although I have to say the base of the tree was the most incredible. The tree trunk had about a sixty foot diameter, easily the largest tree I’ve ever seen, and there was an opening in the center of the trunk that you could enter and climb down a steep ladder to a room underground. Ed climbed down and found a little room with seating and a small half bath, who would have thought. 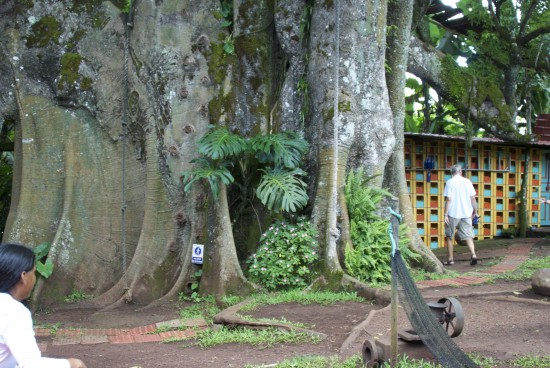