Stepping away briefly from the Crazy Daisy news; they are still on their way around the East/North shores of Australia, so I’m not getting much news due to the poor satellite signals, I hope to have some news (and contact) this weekend. In the meantime, I’m still working hard on promoting my book and working with a purpose on the next one, I’m mostly in the editing stages now, but that can take months if not years, although my goal is to get it published before the end of 2014.

Last week (as those of you on Facebook may already know) I adopted a dog, a greyhound to be precise.

How this came about: Every day I walk Moglie, (Danni’s dog) in Yellow River Park, a beautiful park next to Stone Mountain, the Atlanta Greyhound Rescue is right there only a block from the park, so I drive past it twice a day. I’ve been thinking for a while about getting another dog, I really, really miss the companionship, love and devotion a dog gives you, and since my Pointer Herby, and then little Skye died, I have seriously missed having a dog. I didn’t want to buy from a breeder, despite my yearning for another Great Dane, I really hate that so many people breed dogs indiscriminately and carelessly, there are so many, hundreds and thousands of dogs out there in desperate need of a loving home so I decided to adopt.
The closest Great Dane rescue is really far away (hundreds of miles) and the dogs are snatched up quickly, so that didn’t seem an option at this time. I needed to consider other breeds.
Moglie, who is an absolute little sweetheart, has won my heart and I decided that I would like another Whippet, but it turns out that the breed is so adorable there are hardly ever any rescues available and when there are any they’re gone in a heartbeat. Again I didn’t want to buy from a breeder, I was determined to rescue. So, driving daily past the Atlanta Greyhound Rescue made me think… They were close, the breed is almost identical to a Whippet, just a bit bigger, so why not…
I made an appointment to visit with Moglie.
One by one they let the rescue dogs out to meet Moglie and me. Moglie was very excited to meet so many other giant versions of himself and being an easygoing sweetheart he played happily with them all. Two of the rescues came and stood by my side the entire time I was there, a black & white called “Headband” (horrible name I know, but the racers can never use the same name twice, so they make up all sorts of stupid names) the other dog who seemed to take to me was a solid white called “Cash”, he was sweet, but apparently wasn’t cat friendly. HB, as I decided to call him had a broken leg from his last race on the track, and was horribly thin, ribs and bones sticking out between the enormous mussels from racing. His eyes were so sad and lifeless, and he limped badly from the painful break, my heart went out to him, I knew immediately he was the dog for me.
I brought him home that afternoon.
The first night was interesting, Greyhounds (off the track) have never seen stairs, they live in a crate and the track, period, nothing in-between. It took me 20 minutes to gently coax him up the stairs that night. Moglie sleeps either in his crate by the side of my bed, or on the bed with me. I didn’t want to leave HB downstairs alone on his first night in the house, so I decided to take him up with his bed to my bedroom.
It was an interesting night, poor HB was so confused, he kept trying to squeeze himself into Moglie’s crate, a hundred times too small for him, eventually with much gentle coaxing (by about 2am) I got him to sleep on his bed, Moglie slept in his crate alongside him. The next morning brought more surprises, poor HB having struggled to get up the stairs the previous night was now faced with the decent. It took me another 20 – 30 minutes to coax a violently shaking and terrified dog down the stairs, then once that was over there was the wooden floors at the foot of the stairs… OMG… Greyhounds have never experienced wooden (slippery) floors, his legs were sliding this way and that, he was like a drunk, I had to practically carry him through to the kitchen.

The next night was more of the same, although HB wanted to climb the stairs, he just didn’t know how. Once again, having eventually scaled the mountain, he was trying to climb into Moglie’s crate to sleep, so I made the decision to buy a crate for him the next day. Since having his crate he sleeps quietly and happily alongside my bed. (old habits die hard it would seem)

He is slowly gaining in confidence, although he still shakes a little descending the stairs, and is still very unsure of the slippy floors.

Morning brings forth an extremely happy and excited HB, who manages to follow Moglie jumping on and off my bed to get me up, I’m seriously worried that my bed will collapse under his weight, but I’m so happy he is feeling more confident and happy.

Walking him is a dream, he is a little slow because of his broken leg, so we take it very steady, but he is starting to sniff things and take an interest in his surroundings. He’s incredibly well behaved on the lead. The first couple of times out it was as if he was frightened to even look at anything.

He is so well behaved in the house, sleeping most of the time, bed time is when he and Moglie seem to come to life, so I’ve started a night walk before bed to tire them out, unfortunately it doesn’t really help 🙁 but they eventually settle, and honestly I can’t imagine an easier dog than a Greyhound, I love him to bits.
Watch this space for more HB news. 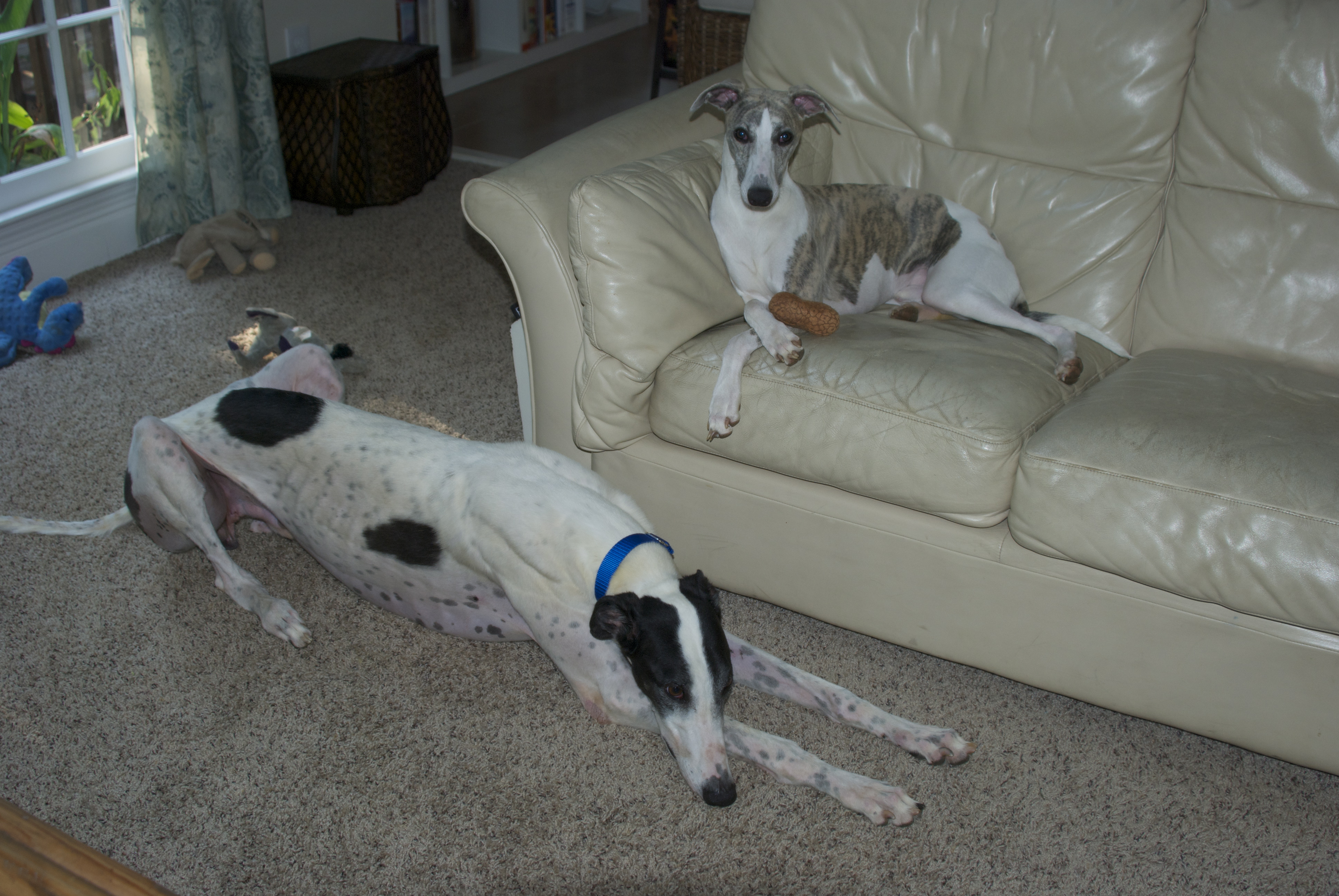 This article was posted in Uncategorized. Bookmark the permalink. Follow comments with the RSS feed for this post.Comments are closed, but you can leave a trackback: Trackback URL.
© 2022 Daisy at Sea. All Rights Reserved. Design By: Eyeon Media.