We weighed anchor at 7:30am heading around the coast to Haamene Bay, where we hoped to find a car rental. Unfortunately, while the guide we are using book is very informative, it’s also very out of date. Things change quickly out here, and little is as it says it is in our book, even our “Lonely Planet” guide book (only 4 years old) for Tahiti and French Polynesia, is already quite out of date.

As we turned into the bay we received a call on the vhf from Tama (a local guide), he was offering to take us on a tour of the island. We told him that we had planned to rent a car, but thanked him and continued to try to pick up a mooring ball outside the Hibiscus hotel. The wind had picked up and was blowing strongly, also there was no pick up line on the mooring ball, after several attempts I was unable to grab it, so we decided to go further into the bay to look for the area the guide book had recommended for anchoring. As I mentioned earlier things change, and the 25 meters depth mentioned in the book was now over 100 feet, much too deep for the length of anchor we have on Daisy. After circling the bay several times unsuccessfully trying to locate a safe anchorage, we decided to return to Haamene bay, the bay we had just left and call Tama and ask him if he would pick us up there in an hour and take us on a tour. This decision turned out to be the best we could have made, and the following tour the best we have taken so far.

Our first stop on our tour was to Tama’s home, (where he kindly took our bags of garbage for disposal). His home was absolutely beautiful, built right on the waters edge with a long pier out into the bay. We were invited to look around his home which was beautifully constructed from all local timbers and stone, the tables, chairs, stairs and stair rails were all formed from tree branches that had been stripped and polished, the table tops were constructed from huge tree trunk sections, that had been highly polished, beautiful works of art. Tama gave us both some delicious Pomello to eat, then took us outside to the pier.

This lead to a beautiful little thatched building situated right at the end. Inside was a large double bed, a small neat kitchen area a bathroom and a surrounding deck with a swinging seat. Large floor to ceiling windows all around the ocean side of the building looked out over the most amazing view of the bay. I didn’t want to leave it was all so beautiful.

Our next stop was just opposite Tama’s house (all be it, up what felt like a mountain). We climbed back into the car and he drove us UP one of the steepest roads winding up to a little guesthouse. The views down over the bay and the island were breathtaking. The little thatched guesthouse was immaculately furnished; an enormous bed took pride of place in the room overlooking the bay through the floor to ceiling windows. The bed had a headboard fashioned out of heavy tree branches. There was a large area to the back of the building, behind Japanese style sliding doors that housed an enormous shower, vessel sink and separate toilet. Wooden decks on several levels around the guesthouse lead to a covered outside kitchen with a bar, tables, chairs and a swing seat. The house is available for rent, and would be absolutely wonderful for a stay on the island, as long as you have a head for heights!

Tama asked us if there was anywhere in particular we would like to visit on Tahaa, he had many suggestions, including a visit to the rum factory (this made Bob smile).

I had made a note of some of the places that I wanted to visit including; a vanilla plantation, a pearl farm and a turtle rescue foundation; “Foundation Hibiscus”, run by hotel Hibiscus. The foundation was dedicated to saving turtles, which had become entangled in local fishing nets. The hotel would buy the turtles from the fishermen and keep them in pens next to the hotel’s pier where they would tag them and feed them daily until they were large enough to be released. Sadly Tama informed us that the foundation had to close, he also told us that in their time they had saved over 1600 turtles.

We stopped at a local supermarket where I was able to buy some beautiful, organic, locally grown tomatoes, as well as a few other essentials, and Bob was able to get cash from the ATM.

Our next stop was the Pearl Farm. Previously, Bob and I have not had much luck with pearl farms, they have either been closed, unwilling to sell to the public, or tourist stops masquerading as pearl farms and selling at inflated prices. Buying pearls out here has not turned out to be as easy as I originally thought. However, with Tama’s help things were possibly about to change.

We were introduced to the owner Philip Chan, at “Ia Orana Pearl Farm” where we were able to watch the grafting process, as it was explained to us in detail by Tama. There was also a small shop at the farm offering loose pearls of different grades for sale as well as finished jewellery. The prices seemed very fair in comparison to what I’ve come across so far. Tama also makes jewellery using black pearls, and had a few loose pearls that I was able to buy from him at a very fair price.

Next was the Rum factory “Domaine de Pari Pari” in the bay de Tapuamu. A small operation where Bob was very interested in the machinery, but I was more interested in the various oils they produced. We did buy some rum, not generally my drink of choice, but this rum was different to anything I’ve tasted so far and I loved it. Having purchased a bottle, some oils, soaps and books we headed off to our next stop “lunch”! 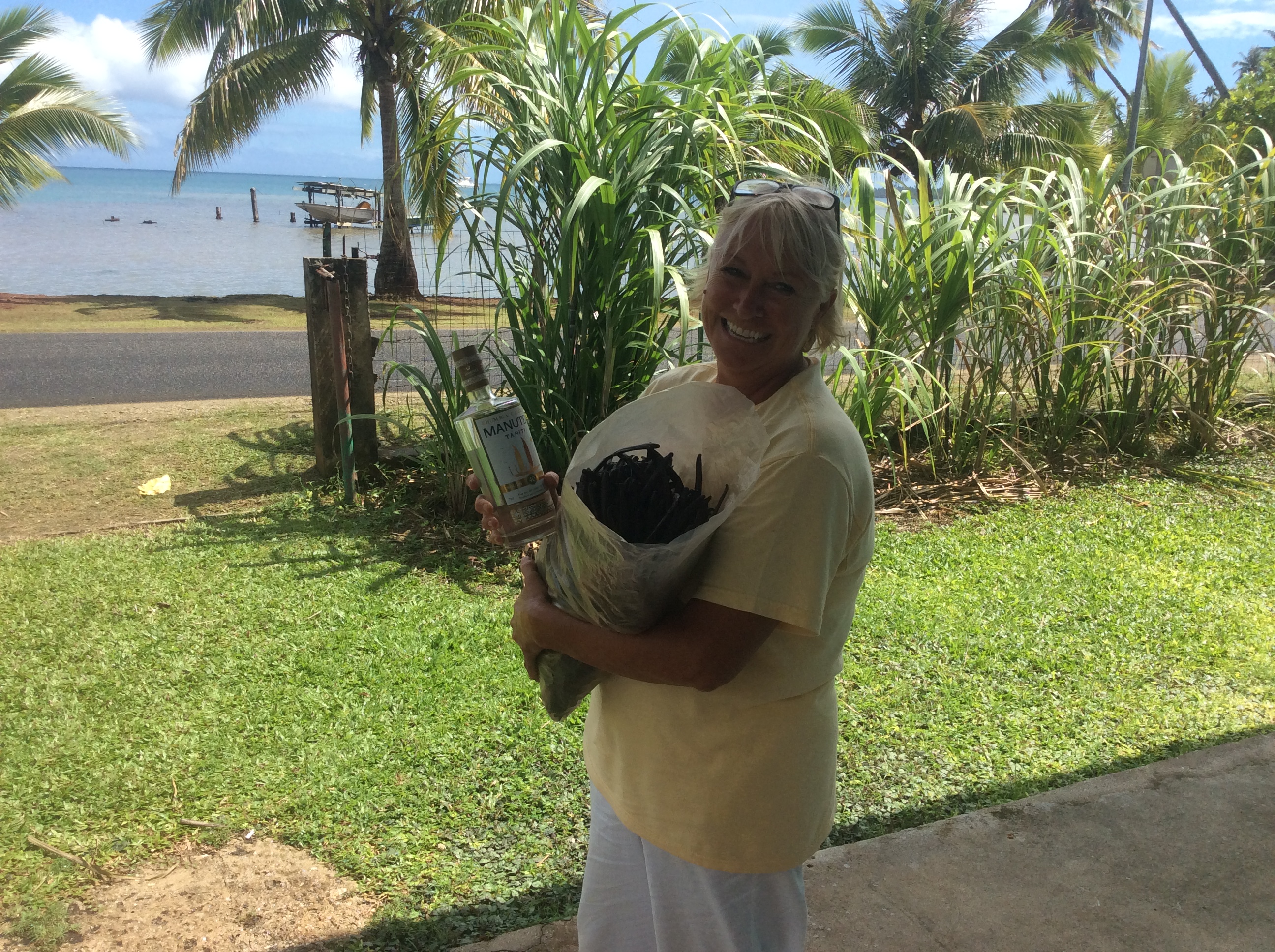 Here I am, notice the big silly grin, I have about five kilos of Vanilla pods and a bottle of rum…

Restaurant “Tahaa Maitai”, in Haamene Bay. A fabulous stop for lunch or dinner. Tama had some business to attend to, so he dropped us off here after introducing us to Chef Bruno and his wife. The restaurant is in a lovely setting overlooking the bay. The menu offers a delicious selection of fresh seafood, with organically grown local fruits and vegetables. A fabulous selection of sorbets, as well as other very tempting, French style deserts were on offer.

As we were the last people to leave the restaurant Chef Bruno had time to come over to chat to us. He was keen to show us his collection of whiskies from around the world, which he was obviously very enthusiastic about. It brought to mind our good friend Leo, (another whisky aficionado); I must remember to tell him of this restaurant he would love it. Having said that, I will tell all I know of this wonderful place.

As it was lunchtime and we were on a tour, so not wanting to spend several hours around the lunch table, Bob and I simply ordered a goat cheese salad and a glass of red wine. The extensive wine list was very tempting and impressive (must bring Paul & Trish back here), but if we were to continue our tour, a bottle may have been too much. The salad was really fresh, absolutely scrumptious, the red wine delicious (should have asked what it was!), I was starting to wish we had decided to spend the afternoon at the restaurant sampling the wines and whisky’s, but then I would have never made it back to the boat and we would have missed our next stop.

The Vanilla Farm was next, where we were introduced to Mateo, the owner. He had finished for the day and everything was closed, but a word from Tama and he opened up for us. Mateo kindly walked us through the vanilla production process with Tama as translator. I was able to buy some vanilla pods, 13 for just $40, (I pay $11 for 2 in the US), I feel the need to make some delectable desserts.

Tama dropped us off at our dinghy later that afternoon and we promised to keep in touch. It had been such a fun, informative and productive tour, we had not only made new friends, we had local (delicious) rum, vanilla, oils, herbs, fruits, tomatoes, books, pearls, and other bits and pieces from the trip.

I can’t recommend Tama highly enough as a tour guide for Tahaa. He will give you the best tour, and take you to the best places, he is also fluent in three languages, French, Italian and English. He knows everyone on the island so expect lots of introductions.

The contact information for Tama, as well as the other businesses I mentioned are below: