Our Fabulous Week in Hiding

Saturday 23rd April
Early Saturday morning we followed our friends Rick and Roz, in their Oyster ‘Reya’, out of the bay of Taiohae, where we’ve been for the last three weeks, for a four hour sail around the coast to the sublime bay of Anaho.
The sail around was a little rolly, but the sighting of the rare “Melonhead Dolphins, (or Electra Dolphins), swimming up close and around Daisy was worth any discomfort on my part. These dolphins are only found around Nuku Hiva (according to the guide book), they were of average size but had completely round faces with no beak, almost cherub like in appearance, It was such a thrill to see them.

Anaho Bay is the most sheltered anchorage on the northeast coast of Nuku Hiva, and one of the Islands best-kept secrets, easily one of the most beautiful bays in the Marquises. The beauty of the bay defies adequate description, I was bowled over by my surroundings. The enormous, naturally sculptured green cliffs that tower impressively over and around the bay on three sides are absolutely breathtaking. I would defy anyone not to be in awe of this magical place.
There was a lovely white sand beach with a few small dwellings, discreetly nestled among the palm trees, a little way back from the shore. The water was totally calm, with little movement other than the gentle lapping waves on the shore. Daisy sat quietly and almost motionless at anchor, yet there was still a lovely cooling breeze. It’s really hard to feel connected to the outside world here, the bay has a wondrous sense of seclusion about it. It is also one of the only bays on the Island that can boast a coral reef, so its the best place to snorkel.
The guide book had mentioned a restaurant “Chez Juliette” as well as a guest house with five bungalows and two rooms, however, we found no evidence of any restaurant or guest house in operation, there was a good size building just off the beach that could well have been a restaurant once upon a time, but seemed to be just a private dwelling now with a small chapel next door and a little house attached. Work with diggers was going on around the buildings so maybe they are working on extending or building a restaurant, although one couldn’t help but wonder how a restaurant could survive in such an isolated location, with only cruisers as customers; I wouldn’t have thought there were enough of us to warrant a profitable business. And as to how the diggers got there, I have no clue! The only access to this location is a ninety minute long, steep trek over the cliffs by foot or hoof (pony) or by boat, so feasibly they must have been brought in by boat, but how they got them ashore I have no idea! Each morning a small motor boat left the bay with a couple of the local men and arrived back late afternoon, other than that and the occasional yacht arriving or leaving there was little to no activity. The bay was unbelievably peaceful, it was utter bliss. 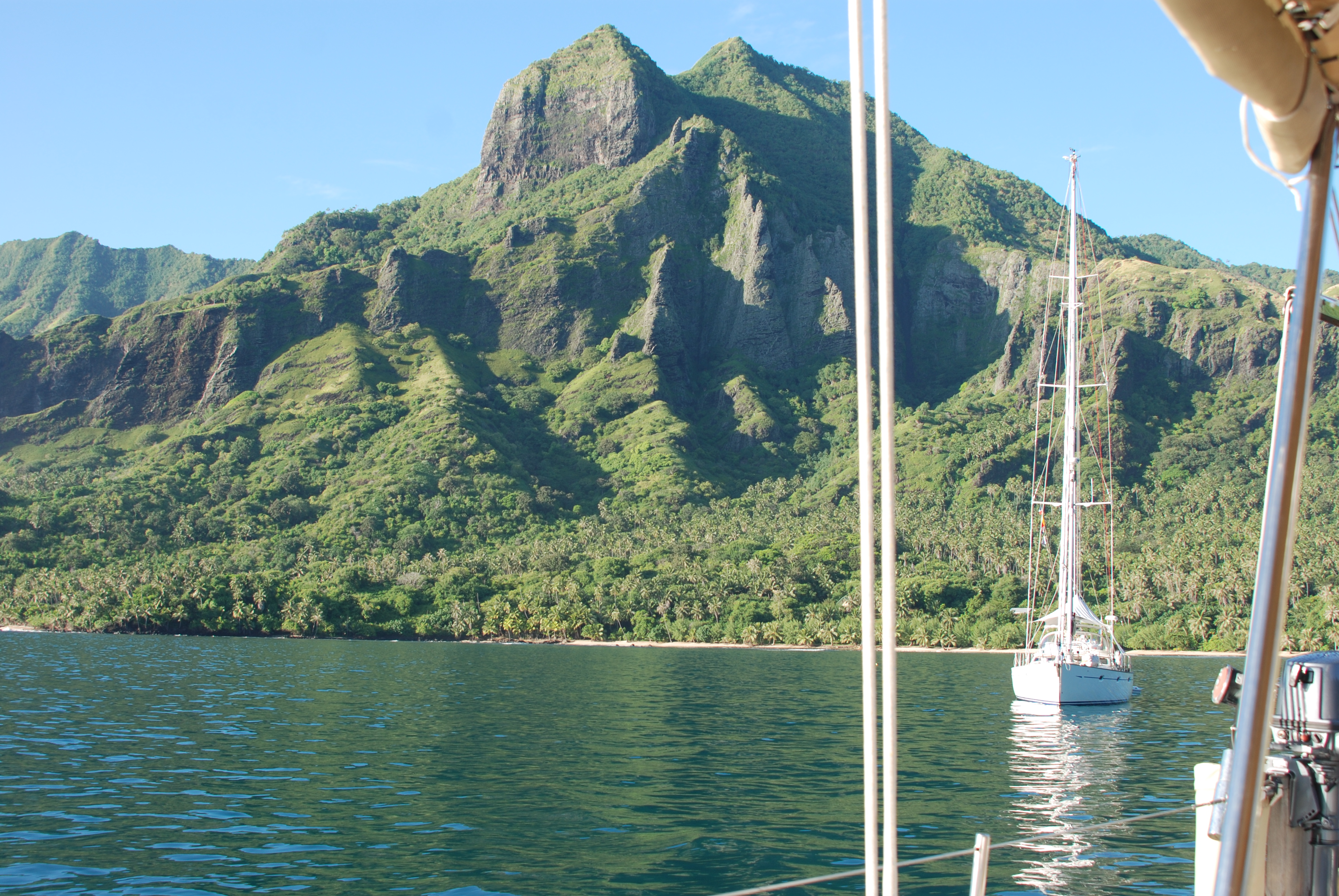 We spent our days lazily, with small jobs of boat maintenance, reading, snorkeling and walking on the beach. I spotted a baby black tip shark swimming very close to shore, a beautiful turtle and a quick glimpse of a manta ray as it surfaced. While snorkeling we saw several Octopus, Trigger fish, Butterfly fish, Tangs, Domino’s, Electric blue’s, and so many other fabulous fish, simply too many to mention. Our evenings were mostly spent in the company of Rick and Roz, taking turns to host on Reya and Daisy with cocktails and snacks and teaching them to play Rumikube and Mexican train.
I did my first dive using the “Snuba”, a devise that allows you to dive without an air tank on your back, instead you have a mouth piece attached to a long tube, which goes up to a floatable devise on the surface, which provides you with air. The tube is attached to a weight belt so if you should accidentally drop the mouth piece , it wouldn’t be difficult to grab it again. I found the air tubes a bit of a nuisance to start with and kept getting myself tangled up, but once I’d sorted that out it became much easier; my other problem was not enough weights, I couldn’t sink to the ocean bed, diving down was much harder than I had realized, I was amazed at how buoyant a body is. It was all quite exhausting, but I’m sure I’ll find it much easier once I have the weights sorted allowing me to dive down without so much effort.
Sadly, after a week in this amazing bay, we needed to dispose of our garbage bags, and also re-provision, so the decision was made to return to Taiohae bay for a couple of days. This would also give us chance to Skype with our family and attend to any urgent emails or correspondence that were overdue.
The sail back was really lovely, even I enjoyed it. It was a smooth, slow sail about 5-6 knots, we saw a few common Dolphins but sadly no Melonheads. Maybe on our trip back to Anaho we will see them again. I’ll have the camera at the ready…

This article was posted in The Pacific. Bookmark the permalink. Follow comments with the RSS feed for this post.Trackbacks are closed, but you can Post a Comment.