Prior to leaving Tahiti, Niue was an Island I had never heard of. Although the glowing reports that had filtered through from other cruisers who had previously stopped there on their way to New Zealand, said that Niue was an Island not to be missed.
1,100 nautical miles west of Bora Bora, and 600 miles from Rarotonga, Niue, affectionately known as “the Rock” is composed of coral limestone, the largest single coral formation in the world. The interior is the remains of a lagoon, flat and now heavily forested. There is no surrounding lagoon only a brief skirt of limestone reef protecting the Island.
On land the coral has produced many caves, caverns and arches. There are no rivers or streams, so the rainwater filters through the coral and passes into the sea completely devoid of any sediment. This means the surrounding ocean is crystal clear, with visibility often up to as much as 230’. 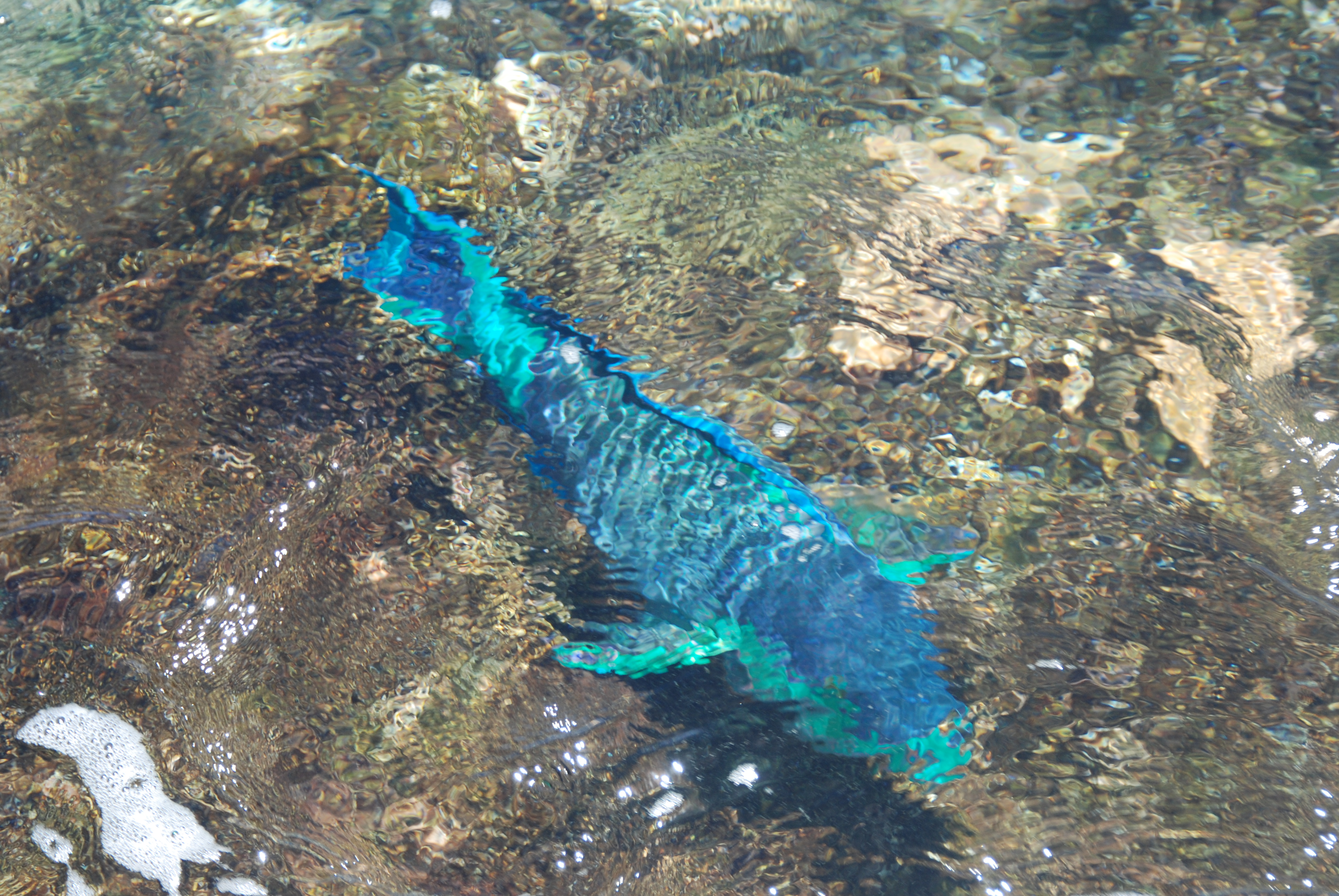 We were absolutely astounded by the clarity of the water. Paul took his snorkeling gear to check their mooring line, and could clearly see the ocean bed, almost 200’ below their boat.
Both ‘Crazy Daisy’ and ‘Babe’ were on moorings off the main town of Alofi. Anchoring is difficult here and best avoided not only because of the depth but the seabed topography, anchors can easily get lodged in rock fissures. Moorings have been placed off the town for visiting yachts.

The day we arrived (Sunday 23rd October), we were picking up our mooring when a large turtle swam along side welcoming us to Niue, this was followed by a couple of butterflies, we were later to discover Niue is an Island full of butterflies. Our next treat was to see a humpback whale and calf swimming just behind Babe. It’s rather late in the year for the humpbacks to still be in these waters so we were really lucky to see this one with her calf. 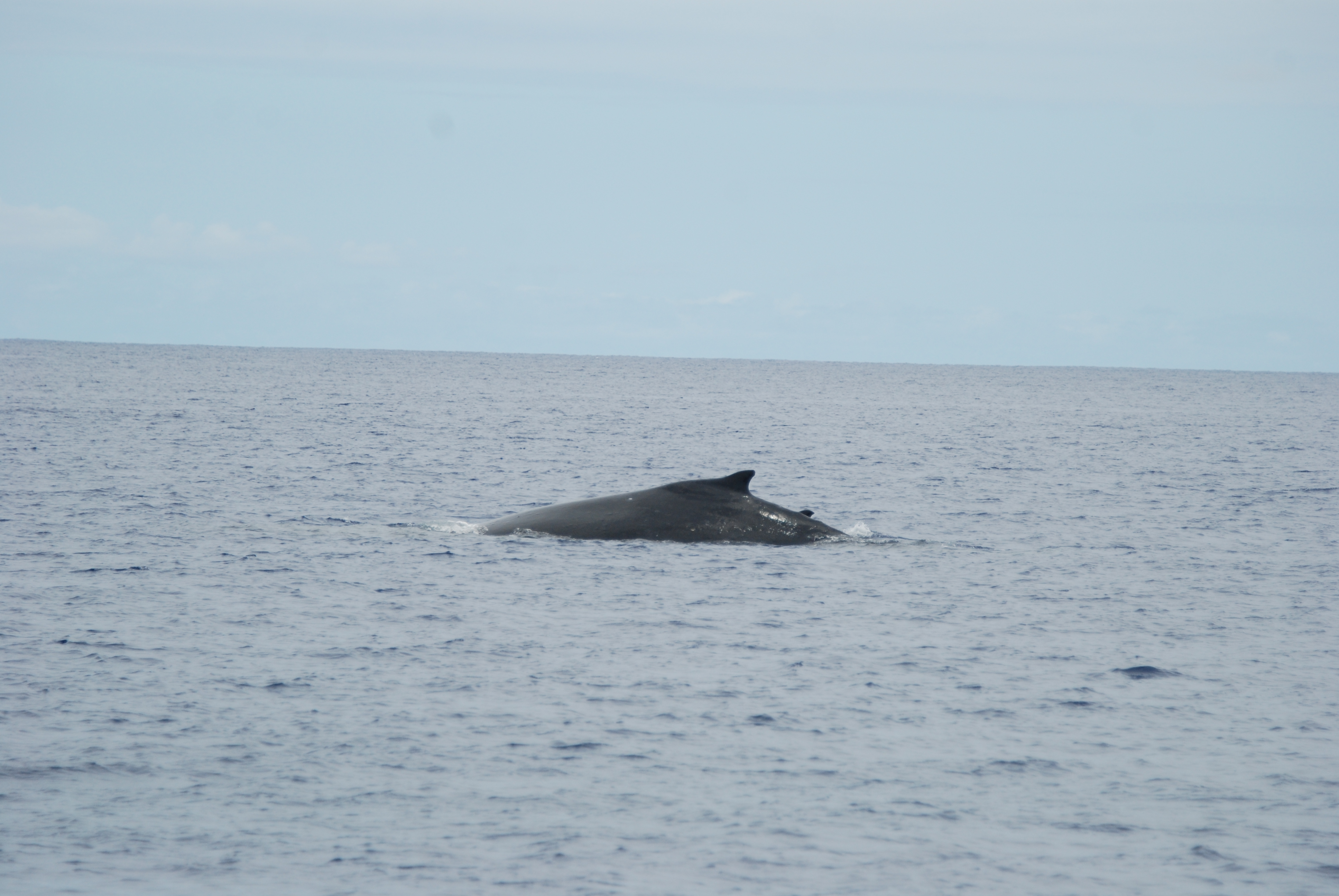 Taking the dinghy ashore proved to be a real adventure! As there is no dinghy dock, shelter or beach landing, small craft and dinghies have to be lifted at the concrete wharf by crane and placed in allotted parking spaces. For most dinghy’s this isn’t a problem, but our “Whoops-a-Daisy” is very heavy, between the steering, large engine and seating, she is about three or four times the weight of most dinghies. Bob had already prepared a sturdy lifting bridle for the purpose of lifting her out, but my heart was in my mouth as I watched him and Paul operating the crane lifting Whoops-a-Daisy out of the sea and onto the land, also, some bright spark had run off with the trolly for moving the dinghies, and even with six of us we barely managed to manhandle her out of the way ready for the next dinghy to arrive. 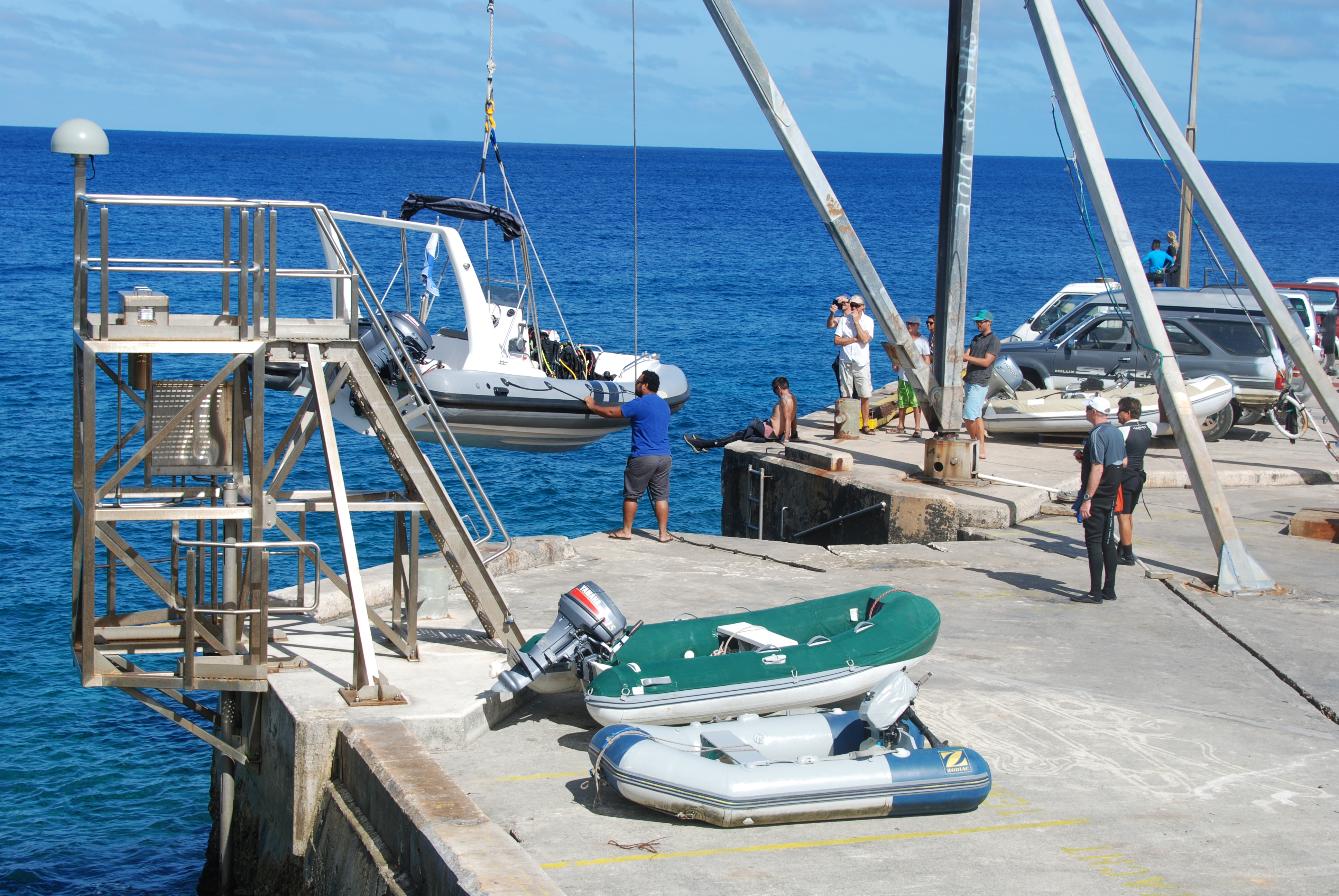 Both Sunday and Monday were church holidays here so just about everywhere was closed, but on Tuesday we rented a car and set off around the Island to explore.
Our first stop along the road was at Peniamina’s Burial site, he was the Niuean who introduced Christianity to Niue. The burial site was elaborate and beautifully decorated with colorful floral arrangements.
We then moved on to the Avaiki Cave in Makefu. This was really spectacular, the site of Niue Ancestor Kings private bathing cave, also the site of the first canoe landing. The word that comes to mind here is “WOW”. It was stunningly beautiful with all the colors of the water and the coral rocks and stalagmites. A couple of local children were swimming in the pool and leaping from cliff ledges high up in the cave, dropping like stones into the clear water of the pool below, for once I was glad Ed was not with us, as he would have been doing the same and giving me heart failure. Paul ventured to dip his foot into the water, it was apparently quite cold! 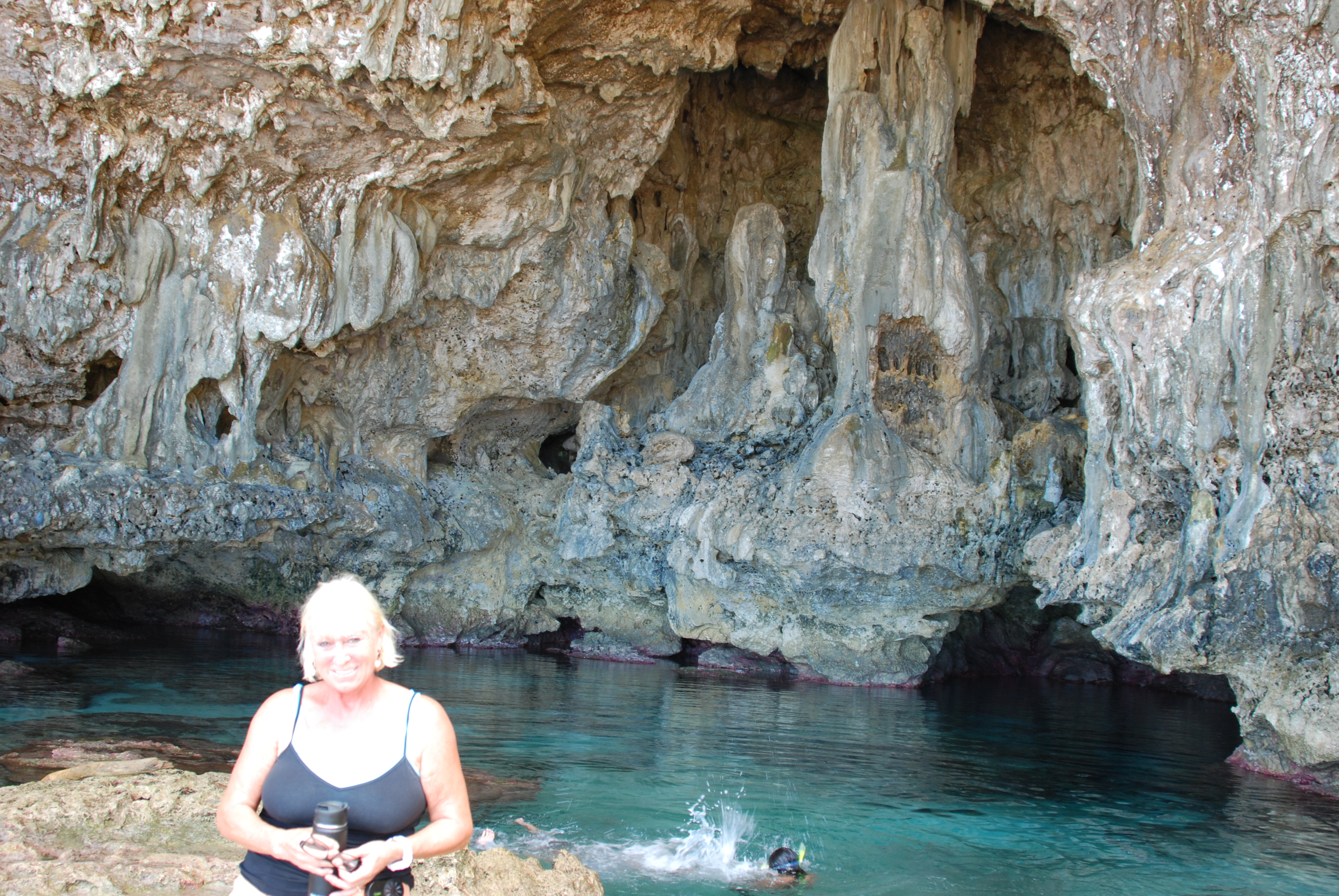 After taking many photographs, and having left our swimming gear in the car, we climbed back up the steep path to the car, to move on to our next planned stop, Limu Pools at Namukulu. This time we took our swim gear with us. The water was quite cold at first but warmed at different locations throughout the pools, the setting was breathtakingly beautiful, and it was refreshing to take a cooling swim through the pristine clear water.

Matapa Chasm at Hikutavake was our next stop. The walk down to the water was through a rainforest filled with a magical cloud of butterflies, they were everywhere. 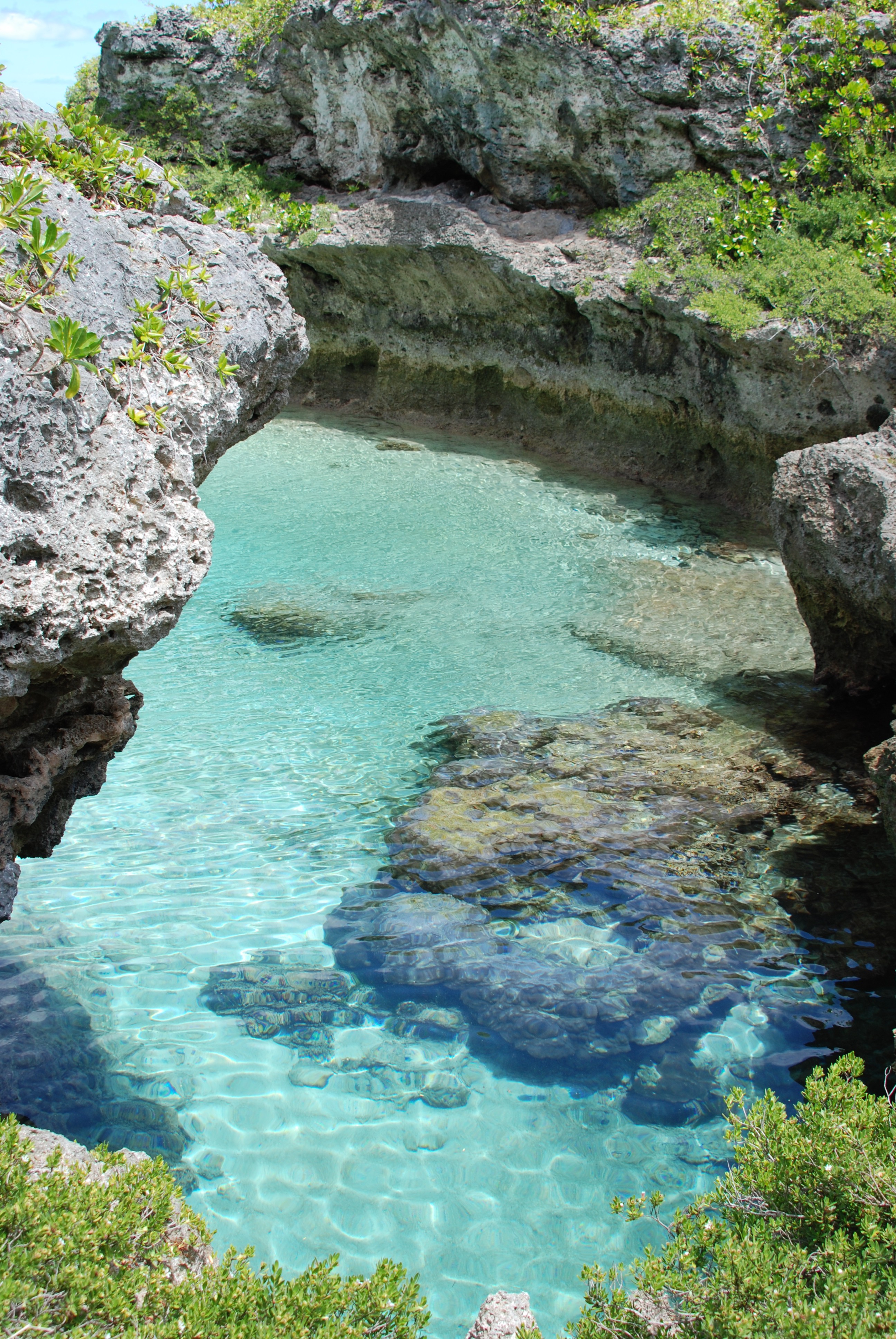 This article was posted in Niue & New Zealand. Bookmark the permalink. Follow comments with the RSS feed for this post.Trackbacks are closed, but you can Post a Comment.