Following a very relaxed Monday in Havannah bay, we weighed anchor early on Tuesday morning and set sail for the tiny Island of Emae (pronounced M-eye).

As usual I slept for the best part of the trip, Bob fished and landed quite a sizable Tuna.  I really don’t like filleting Tuna, its messy, difficult and quite bloody.
Lesley didn’t want her galley messed up with all the fish scales and blood everywhere so I stood in the blistering hot sun on the stern deck to fillet the fish while Glen and Bob washed the deck down with salt water.
It was a messy, difficult business, the skin was hard steel and cutting through it was really hard. Glen helped me and I couldn’t have done it without his help, even with a very sharp filleting knife and shears.
I had changed into old clothes earlier which turned out to be sensible as I ended up covered in blood splatter and grosse fish bits, my hands stank of fish for days after…

Having said that, the tuna was delicious and fed 6 of us for a few delicious meals.

We arrived in the bay of Sulua, Emae, and dropped anchor, what a beautiful little Island it was,  no sooner had we dropped anchor than the chief of one of the villages came out to welcome us and grant us permission to swim and come ashore, I don’t think many visitors come here. 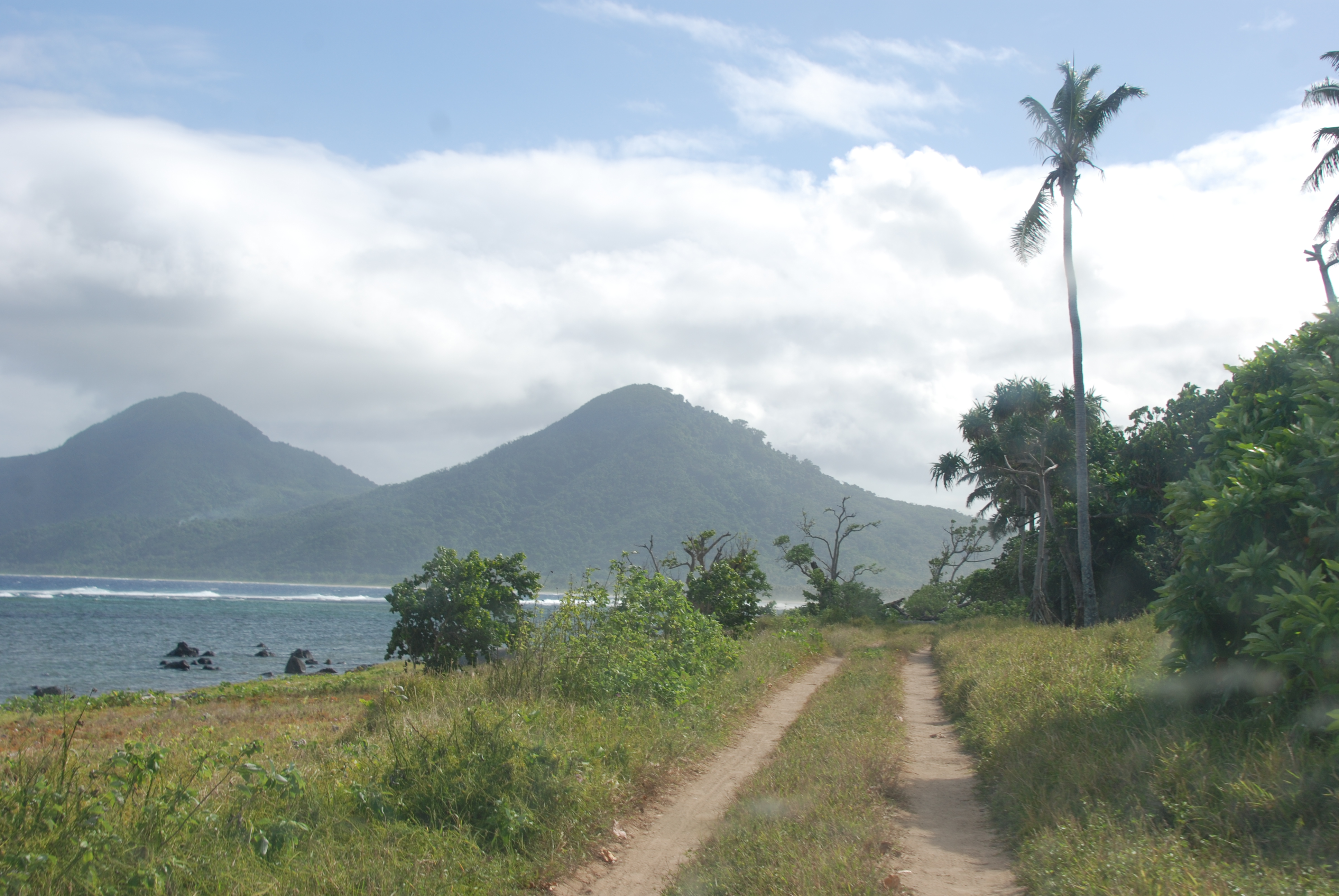 this is the main road around the perimeter of the island that serves the one and only vehicle a truck, owned by the clinic.

Hardly any cruisers ever visit this lovely little island, there is absolutely nothing here in the way of tourist attractions, if thats what you’re looking for, we were not.

Emae only has a very small population of people living in simple huts made from palm leaves, bamboo and odd bits of timber & whatever is washed up on the shore, all hidden from view amongst the thick blanket of trees and fauna covering the Island down to the shoreline.  To look at it from the bay you would think the Island was uninhabited, only the occasional trails of smoke through the thick jungle of bush and trees give away any signs of life here.

A friend of Don & Lesley’s (Tom) is married to a lady (Annie) who’s Mother used to live here about 50 or 60 years ago, and sadly died of malaria on this island when she was just 27, her gravestone is a prominent feature here on the island, and she’s remembered fondly by many of the older people here. Tom has visited with his wife Annie, several times, they’ve installed solar panels all over the island, among other gifts to help the community.

Don had a contact (through Tom) on the island, another ‘Dr Donald’, a local medic, and Don was bringing bags and bags of medical supplies for the local clinic. Our plan was to go ashore early the next morning to take all the supplies and Don was going to hold clinics in all the villages, seeing the local people and children.
Our evening was quiet, a nice dinner of seared tuna and savory rice, followed by games of cards, and an early night, we were all quite worn out. I’m so excited to be going ashore tomorrow with Don and visiting the villages tomorrow…

This article was posted in Oyster World Rally #2, Vanuata. Bookmark the permalink. Follow comments with the RSS feed for this post.Trackbacks are closed, but you can Post a Comment.