Really, how can you not love train travel, this has to be my favorite form of transport.  If it was possible I would travel everywhere by train. It was Bob’s and my 40th (Ruby) wedding anniversary yesterday, and Bob had booked us into a lovely rainforest lodge for the night, in the beautiful vibrant, picturesque little village of Kuranda, high up the mountains. We were to travel there by train, and return by Sky-rail, a cable car ride that takes you high over the rainforest canopy.

In Kuranda there are multiple  tourist attractions, among them the largest Butterfly sanctuary in Australia, an exotic bird aviary and a wildlife (cuddle the Koala’s) park. This had to be the trip of my dreams, trains, cable cars, birds, butterflies and wildlife, it couldn’t get much better. 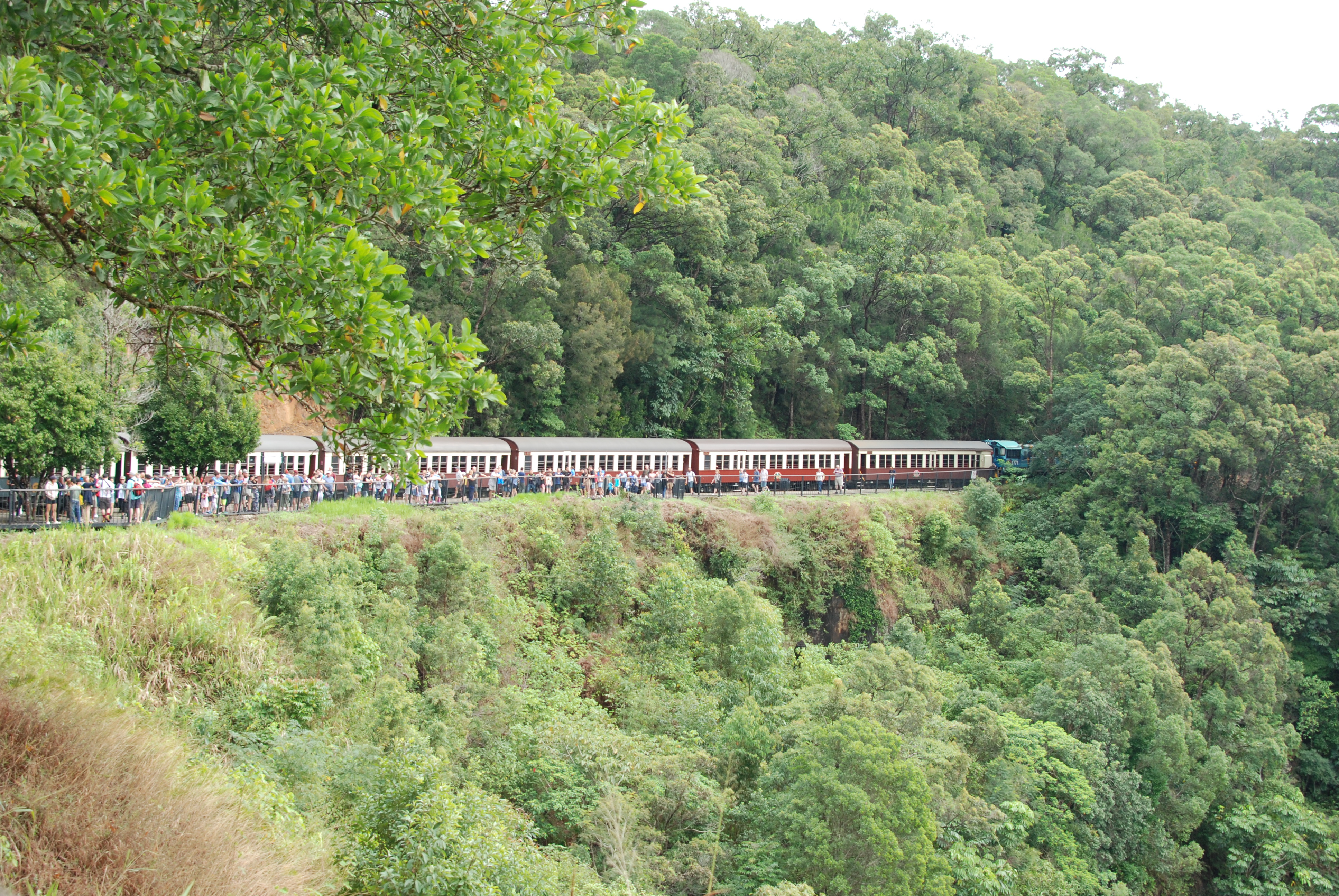 Unfortunately Mother nature had other plans and having throughly drenched Cairns every day since we arrived here (supposed to be dry season!) Bob and I were hoping for a dry, clear day.  And Sunday was one of the wettest days, so we changed our booking in the hotel to Monday which promised to be better, thankfully It was. 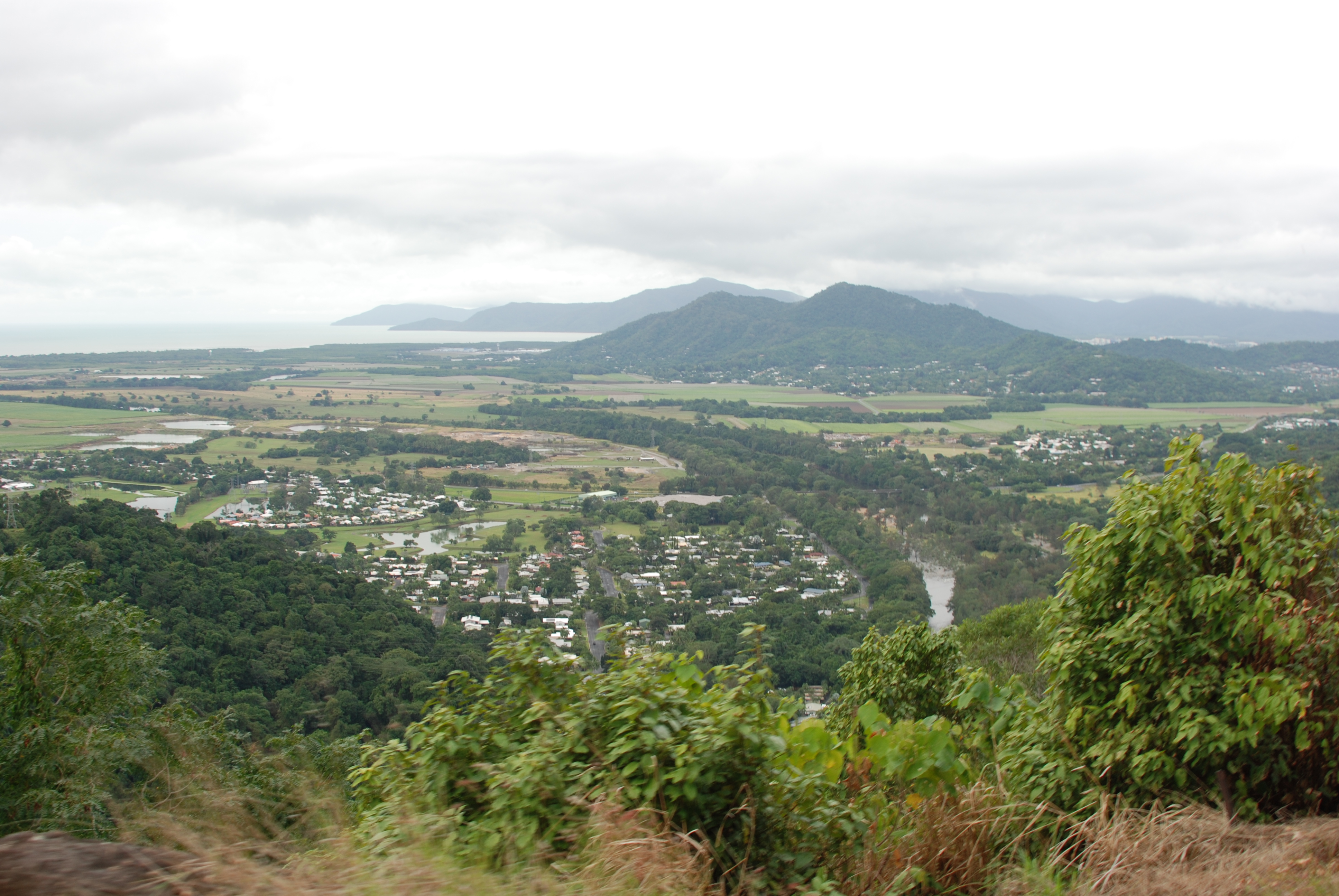 We left Monday morning in the pouring rain,  but by the time we reached the train station the rain had stopped, and the clouds had started to clear. The train ride up to Kuranda took two hours,  The historic railway carriages meandered their way from Cairns through the World Heritage-listed Rainforest of the Barron George National Park. We climbed higher and higher up the mountain as the views grew more spectacular by the minute. We passed towering waterfalls, deep ravines, went through 15 tunnels, and over 37 bridges,   I loved every minute of it. 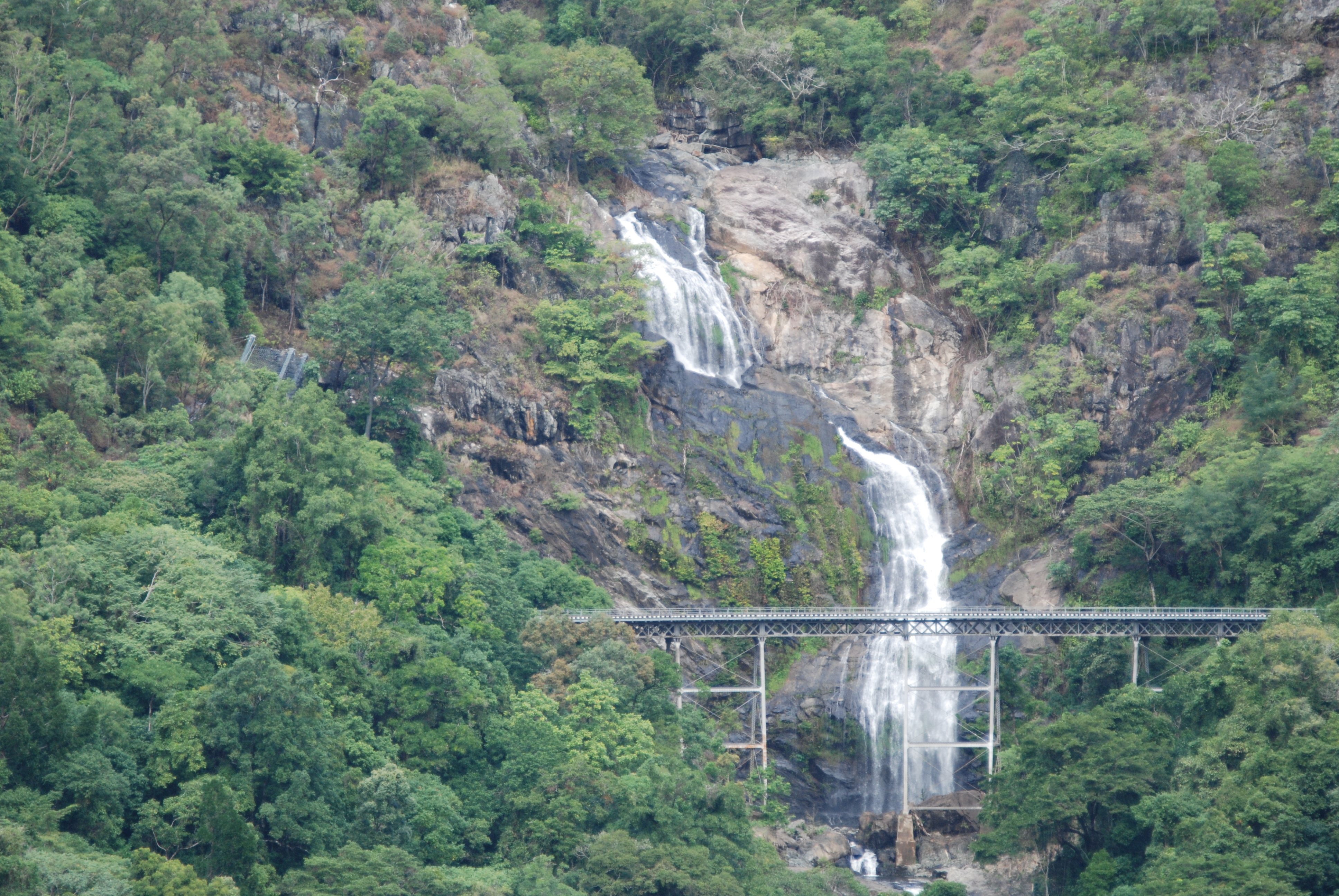 This historic railway line originally opened in 1891 and is a real feat of engineering that’s stood the test of time.  Up to 1500 men at a time armed only with picks, shovels and dynamite carved their way through mountains, rainforest and unforgiving landscape to construct the 37 kilometers of track. Many of the men died during the build.

The train journey up took just two hours. We arrived in brilliant sunshine in the picturesque little station at Kuranda surrounded by vibrant flora and fauna, it was like stepping back in time.

It only took a minute to walk up into the little market town.  I was surprised at just how much there was there. So many stalls, shops and attractions lined the streets.  We spent the rest of the morning and early afternoon exploring the shops, before grabbing lunch in “Frogs” (which was fabulous).  Next was the bird aviary, where Bob was immediately targeted by an enormous Macaw. It landed on his shoulder and started to investigate his backpack, it opened the zip and stuck his head inside.  I tried to get it to remove its head from the bag so I could zip it back up, but the Macaw wasn’t having any of it and screeched loudly at me, I wasn’t about to argue with that beak.  Having realized there was nothing of any interest in the backpack it moved to the strap on the front, and in just a few seconds snapped the catch breaking the strap. This time I used a little more gentle force to remove the destroyer from Bob’s shoulders, while there was still something of the backpack left. 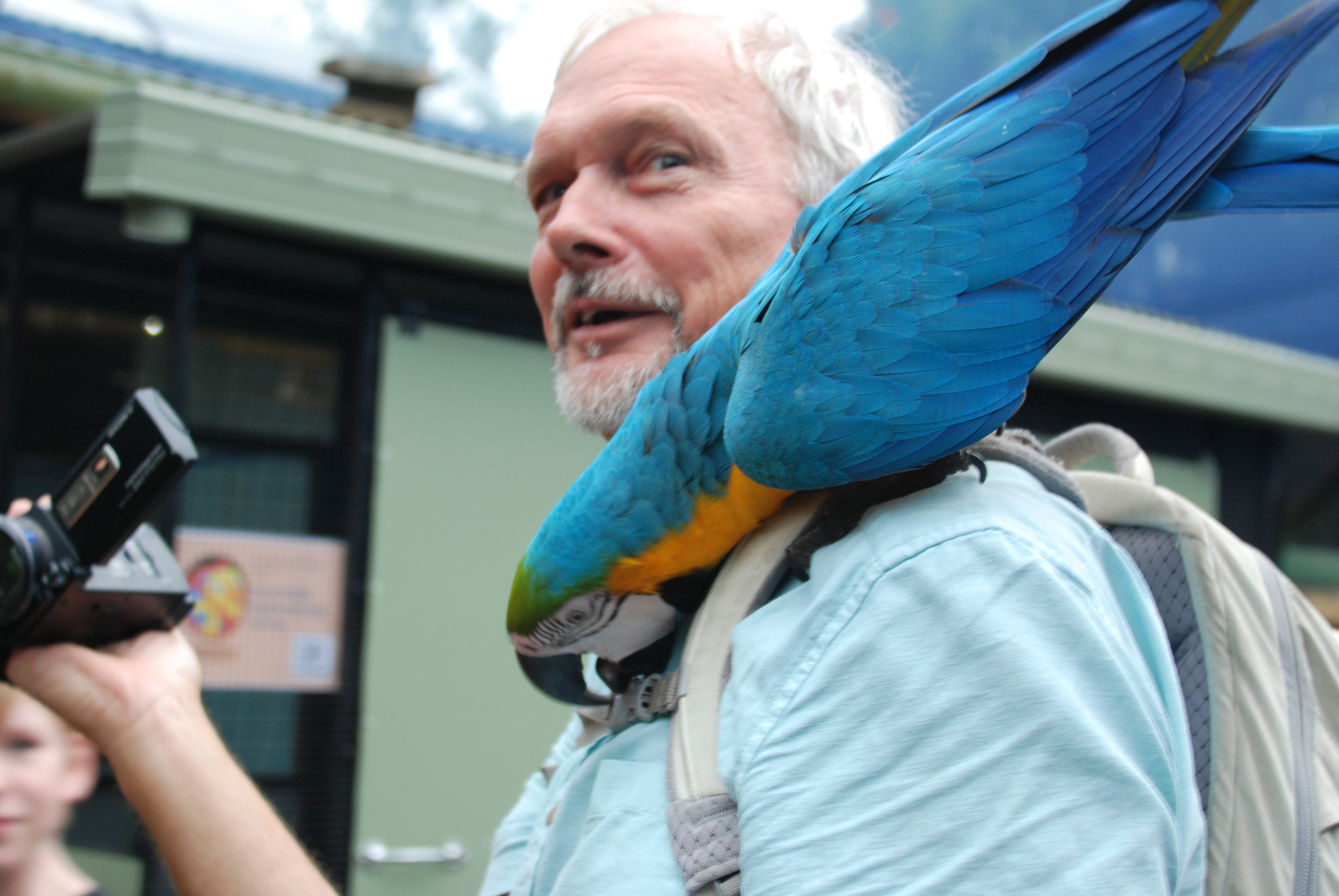 It was amusing seeing Bob with a real Macaw on his shoulder, when just a couple of days ago he had a fake parrot strapped to his shoulder at a pirate party… 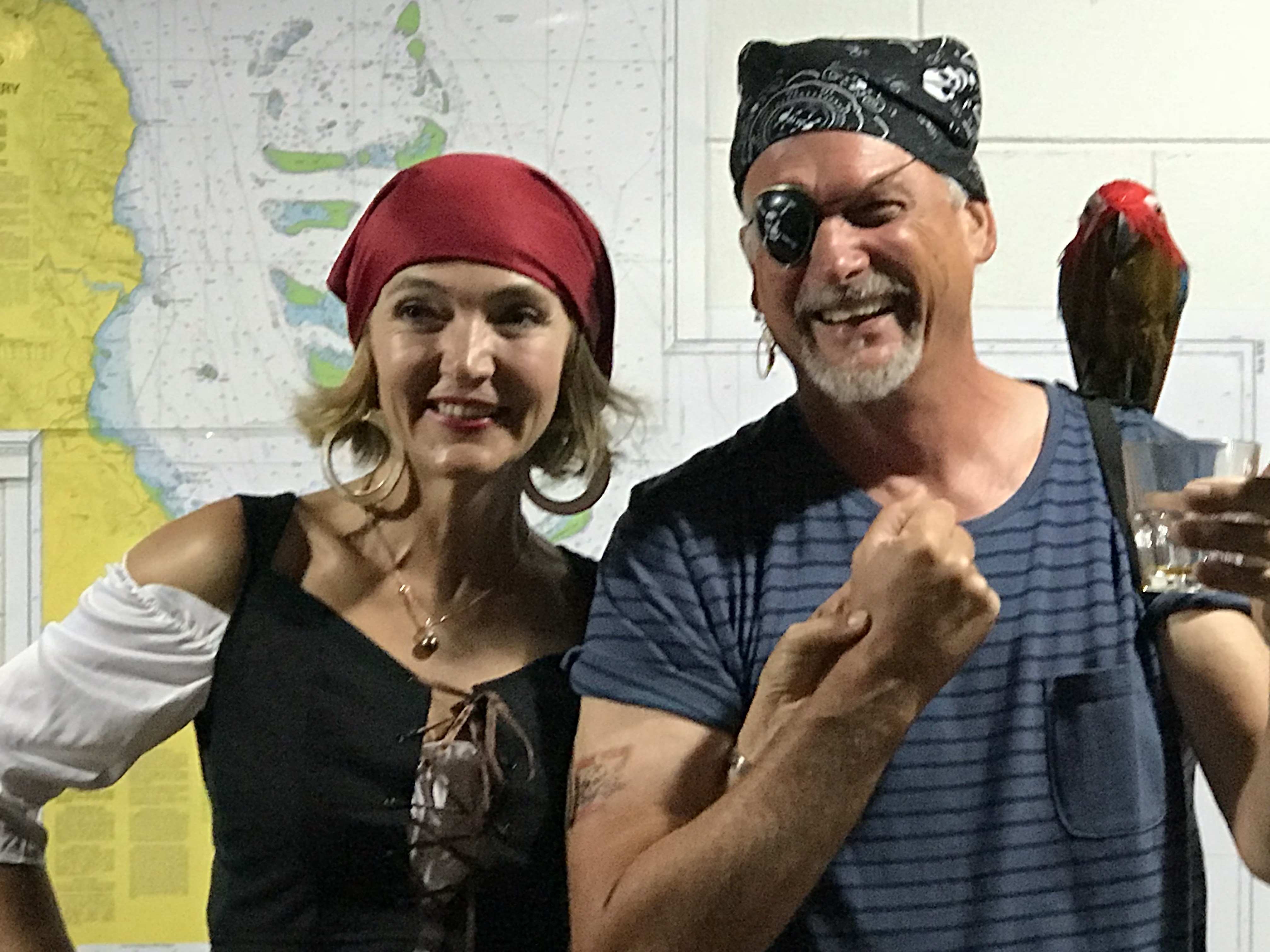 This article was posted in Australian Coast, Oyster World Rally #2, Silliness On board & Off. Bookmark the permalink. Follow comments with the RSS feed for this post.Trackbacks are closed, but you can Post a Comment.