Wednesday march 13th
Not the best night! The boat motored out of the bay at 10pm, and even though we were on the top deck, and furthest away from the engines it was still as noisy as hell. The vibration and noise from the engines kept me awake most of the night, my bed was as hard as a rock so I couldn’t get comfortable, and the hours of darkness really dragged by. Once again it made me appreciated the luxury that I take for granted aboard Daisy. The morning light brought forth beautiful view’s of Isabela. We were in the bay bobbing quietly among the other boats, well quietly other than the generator noise, I have to say Fragata’s generator sounded ‘a tad in need of attention’…
The 10-minute bell rang out at 6:50am, but I was already sat in the dining room, anticipating breakfast.

It was once again a buffet style breakfast of warm (rather than hot) scrambled eggs, that were actually quite tasty, and would have been delicious had they been hot. The toast was “warmed up bread”; I don’t think they understand the concept of “toast”! We had sliced melon, apple, some sort of strange sausage, fruit juice (which appeared to be watered down) and marmalade. Oh well, I kept reminding myself “a different culture”! The food filled our bellies, but had no real flavor.

Our bar tender/waiter on board Enrique is a lovely young man, who is very keen to make us all comfortable.

Our guide for the trip “Harry” is great, he’s a local man from Isabela, very well traveled, with an immense amount of knowledge pertaining to the islands and her wildlife. And he speaks five languages, which I think is impressive.

After breakfast we were taken ashore to walk ‘Las Tinioreras’ an area of lava rock, home to the marine iguanas, sea lions, sea turtles, reef sharks and the island birds, blue-foot boobies, pelicans and terns. The walk was excruciatingly hot, we felt as though we were walking on the surface of the sun. I got some great iguana shots, as well as the ‘sally-light-foot’ crabs, but I was happy to return to the boat before my camera melted, and enjoy a little shade and air-conditioning. 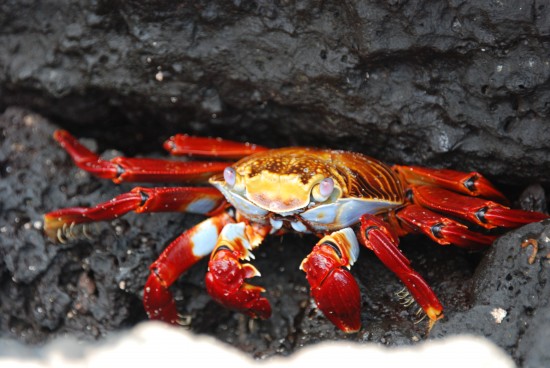 Lunch on board was once again bland, nothing special, more rice and potatoes, with a slice of watermelon for desert. I’m wondering whether the actual chef was away and one of the engineers was preparing the food in the galley? Nothing that’s come out of that kitchen so far is worthy of anyone that calls themselves a chef!

The afternoon took us to Humedales, where we were driven to see the pink flamingos, and then a walk through the mangroves. There were several species of mangrove, but my interest in mangroves is limited to a desire to get as far away as possible because of the mosquitoes. We did see some interesting birds though, the short-billed dowitcher, Darwin finches, the Galapagos flycatcher, Wilson’s Phalarope, Common Tern, Semipalmated Plovers, the greater and lesser yellowlegs, Black necked Stilt, Galapagos Mockingbird and the Oystercatcher to name but a few… I was quickly ticking off my list of birds to spot. 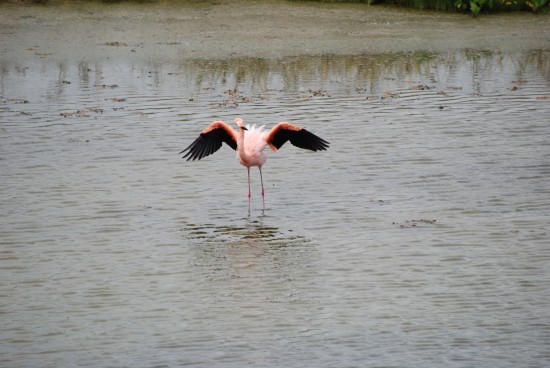 We were then driven back to the shore and left to our own devices on the sea front for an hour and a half. Our tour agenda had promised a trip to the “wall of tears”, but that didn’t happen, I guess we were just left on the sea front instead.

We sat at one of the bars and drank beers and coconut milk with some sort of alcohol added. Danni and Ed went for a swim in the surf. I was craving air-conditioning, but at least here on the front the beers we were served were cold, so I should be grateful for small mercy’s.

Back on board, there were cold beers awaiting everyone except Bob, by the time the other eight guests had a beer, there were none left for him. (Only 8 cold beers in the fridge!) I ordered a vodka tonic, but was dismayed to see the vodka in the bar was a cheap diluted brand, and the tonic came out of a quart size bottle, it was really quite nasty. I drank it because I felt really sorry for the bar tender, who tried so hard to please but was supplied with rubbish to serve his guests, what’s worse we had to pay for every drink except water, coffee, tea and their watered down fruit juice. We could have stayed at a Four Seasons hotel for what we were paying here; I tried hard to stop reminding myself of that!

Although to us the boat is a “tug” (in desperate need of some serious TLC) and the food and drink total crap, most of the crew try hard to please and the scenery, wildlife and experiences we were having were priceless. It’s just such a shame that we aren’t allowed to move Daisy through the islands, we would be very respectful, although I know most would not, so I do understand the need for the rules and restrictions.