Boobies in the Bedroom!

Life’s always full of surprises when you live on a boat, and surprise visitors happen frequently, sometimes uninvited visitors!

As Lesley and I were preparing dinner tonight, twas to be a delicious fare, consisting of Lesley’s sautéed cabbage with cumin seeds & turmeric, my soufflé potatoes, vegetarian & pork sausages to be served in splendor with  our last bottle of wine, at least until we either provision or break into the customs sealed cupboards, (which most likely won’t happen, as the consequences of this action could be somewhat expensive).

Don arrives back at the  boat with Bob, Glenn & Stuart, after a dive near the waterfall, and announces that he’s invited everyone from ‘Miss Tiggy’ (another Oyster) for sundowners. This would normally not be a problem in fact we would usually be delighted, except that we were an almost dry boat, we had plenty of gin, vodka, scotch etc, all the spirits,  but no beer, one bottle of wine and no mixers.  “Hello, welcome aboard True Blue, can we offer you a glass of NEAT gin or vodka?”  I don’t think so…

Our solution was to send Stuart across in the dinghy with a  plea for mixers & beer “Hey when you come over to join us for a drink, can you bring the booze with you?”

To compensate, and with dinner put on hold, I decided to make a selection of appetizers, we might not have booze but we did have lots of food, maybe that would work! I managed, delicious little cheese pastry puffs, mini quiches, vegetable samosas with chutney, cream cheese with tomato chili jam and crackers, olives, artichokes and sun dried tomatoes, with the obligatory bowl of nuts. Not a bad spread to have thrown together in an hour. 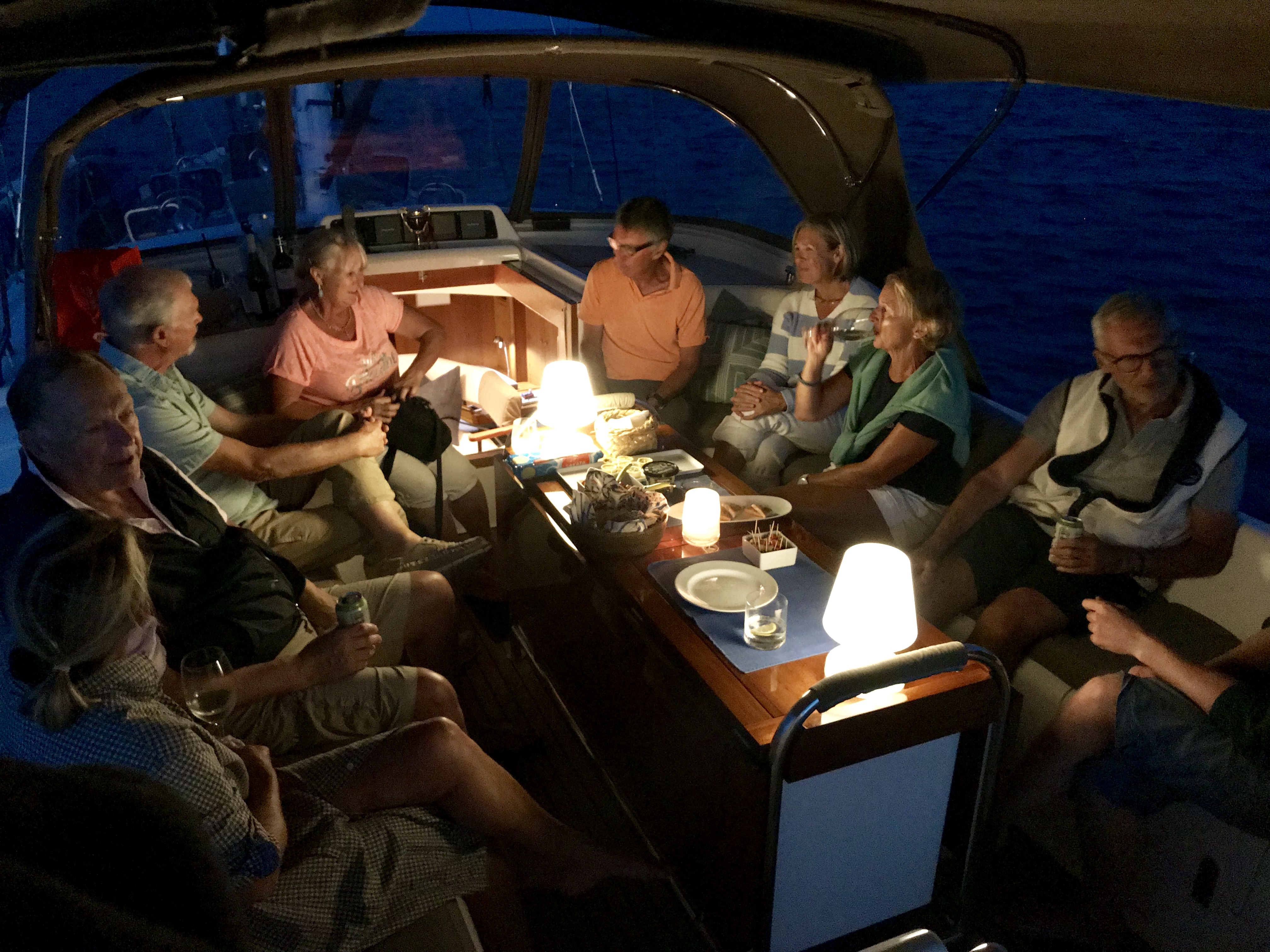 So, to cut to the chase; we all had a lovely couple of hours chatting and catching up while the sun set. And between the wine the beer and the tonics that our guests provided, a good time was had by all.

Once our guests had departed, we were all busy clearing up and Lesley and I were about to restart the dinner when Stuart rushed out of his bedroom with a surprised look on his face and announced “Heather, there’s a Boobie in my bedroom!”  My response was “yes I saw him fly in”.  Stuart looked puzzled, obviously thinking I was joking. “No, I’m not kidding, there really is a Boobie in my bedroom” he said looking anxious.

Earlier in the evening, just as it was getting dark I saw a Boobie flying over the foredeck and then just disappear, I thought that the light had been playing tricks on me in the fading light and he had just swooped low and landed on the water, apparently not, he had dropped through the open hatch and taken up residence in Stuarts bedroom.

We all went to look and there he was, ‘a Boobie in the shower’.

Poor thing, having gate crashed the party he was wandering up and down the bedroom into the shower cubicle and back, pooping as he went.  He didn’t seem that stressed, although he didn’t look too happy to meet his landlords.  Stuart was a little stressed about the boobie pooping all over his clothes and towels on the floor in his bedroom, it did all smell a tad fishy!

Then the fun began, as our intrepid team of Boobie Snatchers sprung into action, Bob, Don, Glenn & Stuart didn’t waste any time in devising a cunning plan with which would remove the Boobie safely from the bedroom.  Bob was concerned for everyone’s safety in trying to catch the bird without harming it, and a possible injury from the very large beak of a creature thinking it was fighting for its life, not understanding we were trying to help free it.

The brain storming continued for some time, with everyone coming up with different suggestions from throwing a towel over it, except the  towels  were too small (it was a large bird with an enormous wing span), or a blanket, but Lesley only has expensive cashmere, so that idea didn’t go down well,  then (my  personal favorite) use a sail bag to create the appearance of a dark cave that it would run into (LOL, LOL, LOL). Lesley filmed this particular discussion on her phone, which provided us with endless entertainment the following morning.

We went up on deck to retrieve a sail bag from the locker, to find yet another bird had taken up residence on True Blue, this time it was a ‘Black, White-capped Noddy Tern’ sitting on the paddle-boards on the foredeck just dozing and pooping quietly, probably waiting for us to launch the boards so it could just bob around the ocean on its own. He stayed put while the sail bag was retrieved from the locker and shaken out; appearing totally unconcerned as he sat just a couple of feet away watching us, he also had the perfect spot for observing through the open hatch  the comedy of errors taking place below.

Once the sail bag was below, the boys drove the Boobie into the shower cubicle and started to construct ‘the cave’ into which, apparently the Boobie would happily run (LOL). Did any of these bright ideas work? No, but it was fun watching our intrepid team get to grips with the solution. In the end in sheer exasperation “if Mohammed won’t come to the mountain, the mountain must come to Mohammed” Stuart threw “the cave” over the bird, grabbed it, and hastily carried the poor creature up on deck where he unceremoniously dropped the Boobie into the ocean, with me following, screaming “don’t drop it in the ocean”, happily the Boobie came to no harm as it immediately flew off into the night, pooping as it went…