Another email demonstrating my husbands talent as a writer, I have to wonder is there anything he is not good at!

Hi Heather,
We are safely anchored in the Rosario Islands attached and below are todays ponderings.
Another Day It’s another day, no not a refresher of the last day, but another day. Totally new, no recycled version of yesterday, a fresh beginning every 24 hours. The sea is flat, seemingly driven that way by the oppressive weight portending the heat that the day will bring, it is already smothering the shimmering vista of low cowering vegetation that have learned how to survive on the small ringlet of islands that enclose us. To us who bring our own survival with us and so oblivious of the challenges of life, we see beauty and tranquility in the early morning, still and graceful, over lush green islands basking on the line that separates a cloudless pale blue infinity of the upper world from the flawless blue piazza where we dropped anchor. But yesterday, that different day, we felt the breath of ………. Not death, but the knowledge that life is transcendary and we were walking a line of risk as we plunged and recoiled from the short sharp seas that boiled over the shoals and reefs around these islands when the winds swing to the north and whoop and gush between 30 and 40 knots. Out in the open sea such a day is exhilarating, knowing that our mobile fortress luxuriates in being able to demonstrate what she was created to do.

Yesterday however we were not infinite distance from the hard stuff, we were walking a tightrope between rock and reef and long wending shoals that funnel you in to the jaws of the of the channel that gives access to the leeward side of the islands where we were seeking the refuge of an anchorage we had used on another day. To day, this new day, above the reef that coils and stretches in every direction around us we see and hear the rippling rain drops of shoals of small fry breaking cover as they leap to avoid the jaws of faster fatter cousins. Yesterday as we approached our refuge and this reef.
The islands were our friends and gave us shelter from the wind but it was still too rough to pick out the reef from the helm position and we had already learned that the positioning of the hard stuff on the electronic chart plotter could not be trusted, when as we weaved our way though the shoals, we tried to line up beacons and hazard warning towers on shoaling reefs, only to discover that either they or we were misplaced by several hundred feet. More that a passing concern when the path to be followed is less than one of those hundred feet wide. So today we plan to swim and play on that reef. 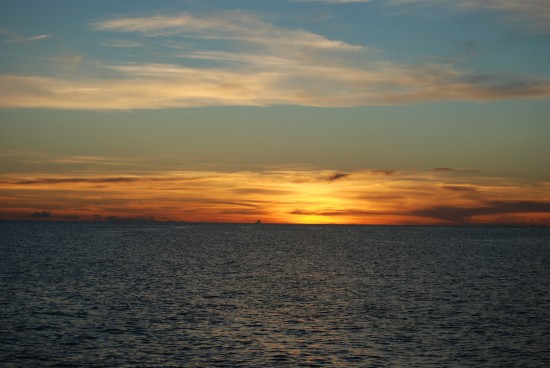 But yesterday my mind was fresh with memories of our last visit here. When we watched another sail boat wrestle and then get caught and twisted on these reefs for nearly 2 hours, as it tried to enter into the sanctuary of our anchorage. On that day, a different day, the wind was the little 8-knot nephew from the East of the stranger from the North that challenged us to day. So armed with memories of how we went out and helped free that sailboat from the reef and totally discarding the positioning of the reef on our electronic panaceas of survival, Edward climbed onto the boom and called port – starboard while Paul manned the depth gauge calling 6ft – 5ft – 4ft – 6ft as I attempted to react to their instructions, holding a path at 1-2 knots while the stranger from the North tried to pull and trick me to one side or the other. To day the stranger from the North has left, and appears to have taken his nephew with him, so we are left in the temporary hole caused by their absence, bobbing aimlessly at anchor in a bay of apparent tranquility.

So today we have slowly maypole danced 3 full revolutions around mummers anchor as I have sat here reflecting on time and place, bracing myself for the play that such day deserves.
Luv Bob

This article was posted in Captain Bob and tagged Columbia, Crazy Daisy, Isle Rosario, Oyster World Rally. Bookmark the permalink. Follow comments with the RSS feed for this post.Post a Comment or leave a trackback: Trackback URL.